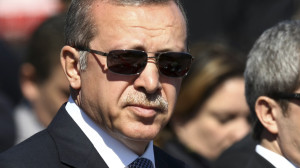 Protests began in Turkey in May of 2013, allegedly over the government’s plans to develop a park in Istanbul. While the Western media attempted to portray the growing unrest as “grassroots” and leaderless, in fact, the opposition Republican People’s Party (CHP) was behind it from the beginning.

Now, CHP openly claims leadership of the movement as it applies pressure on the government of Prime Minister Recep Tayyip Erdogan, head of the Justice and Development Party (AKP). But to what end?

PM Erdogan for his part, did his best to aid and abet the United States, England, and their regional collaborators in the Middle East to destabilize and overthrow the government of neighboring Syria.

Erdogan would even go as far as harboring terrorists within Turkish territory, providing them with logistical support, and even helping steer vast quantities of cash and arms into their hands. At various points throughout the now 3 year conflict, Turkish troops were used to apply pressure on Syria by amassing troops along the border and threatening military action against fabricated and accidental border incidents. Turkish planes even violated Syrian airspace, with one being shot down over the Mediterranean Sea.

With a regime performing so willingly as a proxy for Western interests, why would the West then be interested in removing Erdogan from power?

CHP’s leader Kemal Kilicdaroglu, currently seeking Erdogan’s job, was in the United States on December 2, 2013, to give a talk (full transcript .pdf here) before the corporate-funded policy think tank, the Brookings Institution. His warm welcome and announcement of a CHP chapter opening in Washington D.C. was only matched by his eagerness to fully integrate Turkey with the European Union. He also was eager to replace the current political landscape of Turkey where strongmen like Erdogan can still rule with an authoritarian streak, with a flaccid, ineffectual regime of administrators who serve merely as a medium for foreign corporate-financier interests.

And while the certainty of Kilicdaroglu’s accession into power is still not guaranteed, the very real pressure his street mobs are putting on Erdogan serves as an impetus to prod the current government down a path most certainly not in the best interest of either its own self-preservation or the best interests of the Turkish people themselves.


In addition to the squandering of Turkey’s political capital and global reputation during its involvement in the Syrian conflict, the West now appears to be positioning Turkey as a potential battering ram against Russia regarding the Crimea standoff.

With Crimea now independent and beginning the integration process with the Russian Federation, the West has attempted to consolidate and bolster the regime it itself has installed in Kiev, Ukraine. To do this, the West has leveled sanctions against Russians and Ukrainians perceived as enemies of the newly installed regime, as well as begun the process of arming and aiding the regime ahead of inevitable uprisings sure to challenge their undemocratic grip on power.

These measures appear to be futile, and to strengthen its hand, the West has been mobilizing its media to manipulate and shake the confidence of investors regarding Russia’s economy, as well as raise legal questions regarding the status of Crimea in relation to Turkey. As preposterous as it may seem, articles from AL Jazeera, Foreign Policy, Al Monitor, Hurriyet Daily News, and the International Business Times have taken multiple angles to explain how Turkey now somehow has a role in deciding the fate of Crimea, rather than simply respecting the democratic referendum already carried out last week.

And indeed, in each article, Erdogan’s reluctance to damage ties with Moscow are cited as reasons why Turkey “should,” but “isn’t” moving against Russia regarding Crimea. Enter CHP’s street mobs and the growing dissent now making headlines.

Twitter being banned in Turkey, according to Erdogan himself, was a move designed to counter what he calls “Turkey’s foreign enemies.” Indeed, in Washington Post’s article, “Turkey bans Twitter as Prime Minister accused of graft cover-up,” it reports:

The premier says the investigation and leaks are part of an effort to undermine him ahead of March 30 municipal elections. He blames supporters of a United States-based Islamic cleric, Fethullah Gulen, within Turkey’s courts and security forces, with support from Turkey’s foreign enemies. Erdogan has responded by removing the prosecutors in charge and purging thousands of police, effectively blocking further inquiries.

At a rally on Thursday he vowed to “dig up Twitter and so on – all of them – from the roots” and said he didn’t care about the international response.

The article also mentions Brookings D.C. guest,  Kilicdaroglu, whose CHP party is at the center of the growing unrest in Turkey:

Kemal Kilicdaroglu, leader of the main opposition Republican People’s Party, said the ban was harming Turkey’s image in the world and the party was applying to overturn it.

It is clear that more hoops lay ahead for the government of Erdogan to jump through in order to satisfy the West, and the lash applied to his government’s back is the CHP’s street mobs – enabled with all the type of support synonymous with Western-backed destabilizations.

What the West Wants From Turkey Regarding Crimea

There is little Turkey could actually do in Crimea itself. However, Turkey’s proximity and ties to the Tartar minority the West would like to use as a pressure point against Russia in Crimea, could be useful, as could another voice lent to bolstering the West’s narrative regarding Ukraine in general. A harder line from Erdogan regarding Russia would lend additional perceived “credibility” to the West’s narrative, but it would come at a heavy price regarding future Russian-Turkish ties.

Erdogan, for all of his complicity regarding Syria, now with mobs threatening his position in power, most likely realizes there is no amount of servitude that will satisfy the West as it is seeking to advance its interests, not the people through which it does so. Alienating Russia politically would lead to potential fallouts economically – neither of which Erdogan (or even his successors) could afford. Unfortunately for Erdogan, the short leash the West has him on will not allow for considerations such as self-preservation politically, or even nationally.

For the West already facing growing challenges regarding their meddling in Ukraine, Turkey’s inability to definitively side with it is a problem they appear to have solved with the attempted overthrow of Erdogan’s government and the installment of the impotent, needy, easily manipulated, pro-European CHP party. CHP under Kilicdaroglu might just take the hardline stance the West is seeking, regardless of its cost to its own future as well as Turkey’s.

Driving a wedge between Turkey and Russia would be yet another move by the West toward its greater goal of encircling and containing Moscow. The unrest in the streets across Turkey in the coming weeks and months will be a gauge of how obedient Erdogan is being in this new role the West has cast him in – and should he decide not to take that role and also fails to quell the mobs in the streets – an eager Kilicdaroglu awaits.