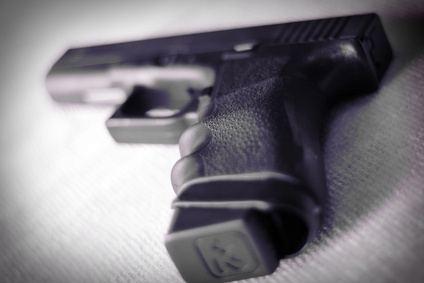 The news report goes on to say, “[T]he Police Department is partnering with 20 churches.

First Deputy Supt. Alfonza Wysinger says anyone who turns in a real gun will get a $100 gift card. Replicas and BB guns are worth $10.

“‘No questions asked,’ Wysinger said. ‘Just show up at the church, and hand over the weapons to the CPD officer that will be there, and get your $100 gift card. So we strongly suggest that people come out that have weapons lying around the house, or weapons, maybe, that they don’t necessarily want in their house. This is a chance to get some money for their weapon, and get another dangerous weapon on [sic] the street.’”

The report then lists 23 churches that are identified as participating in the gun turn-in event.

But I particularly enjoyed a few of the comments that readers posted to the online report:

One guy wrote, “Gun thieves will be lined up for blocks.”

Another wrote, “They can arrest you for having a gun outside of your house.”

And another person wrote, “[Criminals] are turning in the guns they used in multiple crimes because the stupid politicians will destroy them thus getting rid of the evidence…”

And perhaps my favorite comment on the story was this one: “WOW. BOTH police and CHURCHES turning traitor against the Constitution.”

Truthfully, think about the absurdity of this gun turn-in program. As one reader noted, think of the money gun thieves will make on this program. As any tenured lawman knows, most guns are stolen to resell in order to get the money to purchase drugs, booze, sex, etc. Some are used in crimes, sure. But most are used for the purpose of making a buck. Imagine a gun thief who has perhaps 50 or 60 stolen guns in his possession: that guy has just made a small fortune OFF THE TAXPAYERS. Remember, there are “no questions asked.” And since the cops in Chicago seem to be doing this annually, how many gun thieves are stealing guns all year long and just saving up for the big payout, or how many start a gun-stealing frenzy just before the anticipated gun turn-in program? $100 for a stolen gun is often a higher bid than what the thief would get on the street. What a deal!

And think of this angle: what better way to get some quick dough by selling a gun or two that is totally inoperable, and then taking the money and buying a gun that actually works? Again, what a deal!

And another reader nailed it when he observed that taking a firearm outside your home is a CRIME in Chicago. In fact, I am surprised to learn that people in Chicago can even legally have a gun in their homes. You cannot legally carry a firearm in Chicago. So, the CPD is encouraging people to BREAK THE LAW. I can just imagine people all over Chicago caught carrying guns and telling the arresting officer, “I was going to take it to the gun turn-in program.” And you know what the cop would say, right? “Tell it to the judge.”

This brings up another point: why is there so much gun-related crime in Chicago, anyway? After all, Chicago has some of the most restrictive gun laws in the entire country. GUNS ARE ILLEGAL IN CHICAGO! So, pray tell, where is all of this gun-related crime coming from? I thought that passing laws restricting the ownership and possession of firearms was supposed to reduce crime? If that is truly the case, Chicago, Washington, D.C., and New York City, etc., should be the most peaceful places on earth! Of course, the truth is if you want to find peaceful communities, go to states such as Montana, Wyoming, Idaho, and Vermont where just about everybody is packin’ heat!

Plus, the point that another reader made about criminals turning in the guns with which they have committed crimes and thereby letting the authorities destroy those firearms–thus destroying the evidence–is a very astute observation. Way to go CPD!

But the icing on the cake for me is the point that one reader made when he said, “WOW. BOTH police and CHURCHES turning traitor against the Constitution.” Bingo!

Another reader was even more direct. He said, “The government and so called churches will be the downfall of this great country’s Constitution.” Amen!

It grieves me to say that a sizeable percentage (if not a majority) of today’s churches are as culpable in the dismantling of our Constitution and Bill of Rights as any entity one can think of. So many pastors and churches today are unwilling to take a stand against almost ANYTHING that might have political overtones. I doubt that most of them would say “Boo” to the devil himself–especially if he came dressed in a government uniform. They are all about making people feel good, entertaining people, and stroking people’s egos.

In fact, let me ask my church-going readers to try an experiment. The next time you go to church, ask your pastor where he or she stands on the Second Amendment. Ask them, “Would our church participate in a police-sponsored gun turn-in program?” Ask them, “If the President declared a ‘national emergency,’ and FEMA (or any federal or State agency) asks you to ask your congregation to turn in their firearms, would you agree to do so?” Go ahead: ask them! Then observe their reaction very carefully.

You can count on this: virtually no pastor whose church is receiving federal “faith based initiative” taxpayer monies would take a public stand for the Second Amendment under those conditions. Count on it. So maybe you should also ask your pastor if your church is receiving federal “faith based initiative” monies. All over America, literally thousands of churches are accepting federal tax dollars to help support their daycare centers, their after-school programs, their “Christian” schools, their food banks, etc.

Contrast today’s churches to those of Colonial America. In those days, gun racks for the rifles that had been brought to church were as common as coat racks. In fact, many times, the church basement or back room was used as a place in which caches of firearms were commonly stored.

I realize the times in which we live do not remotely resemble those of Colonial America, but the spirit and attitudes of the pastors and men of the church should still be the same: that freedom is fragile and that firearms are “the people’s liberty teeth” (George Washington), that, “An armed society is a polite society” (Robert Heinlein), and, “No freeman shall ever be debarred the use of arms” (Thomas Jefferson).

And while these milquetoast preachers are preparing their sermonettes, they should read what the Lord Jesus said: “He that hath no sword, let him sell his garment, and buy one.” (Luke 22:36) Of course, the Roman sword was the First Century equivalent to a Twenty-First Century handgun: it was the weapon of choice for personal, close quarter combat. In today’s parlance, Jesus said if you don’t have the money, sell your clothes if you have to, and buy a GUN! That’s a far cry from churches in Chicago asking people to give up their guns, isn’t it?

I don’t know about anyone else, but I will take the word of Jesus over the word of Barack Obama and his Chicago Gestapo any day!

P.S. Through Independence Day, we are shipping THE FREEDOM DOCUMENTS. This is a giant compilation of 50 of the greatest documents of American history in one volume, under one title. This is available nowhere else that I know of. This summer printing is limited, so if you want to get your copy of THE FREEDOM DOCUMENTS, you need to order now! Go to:

*If you appreciate this column and want to help me distribute these editorial opinions to an ever-growing audience, donations may now be made by credit card, check, or Money Order. Use this link:

And please visit my web site for past columns and much more at: