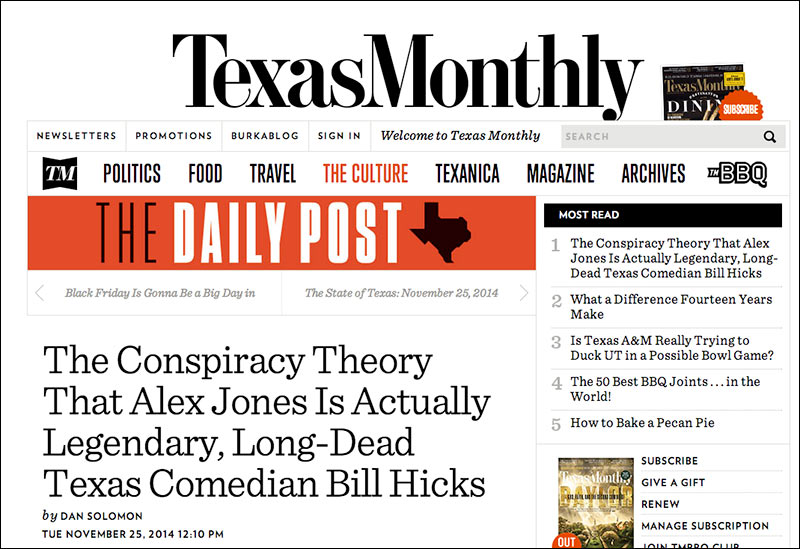 In likely one of the most bizarre pieces ever run in the publication, the popular Texas Monthly magazine dedicated an entire article to fleshing out a conspiracy theory that has managed to entrench itself into popular culture.

Did they delve into the controlled demolition-style destruction of World Trade Center 7, or its mysterious free-fall collapse? Nope.

Did they cover the fact that the US government was caught experimenting on over 600 black men in Tuskegee, Alabama, by injecting them with the STD syphilis, or that the US Army conducted secret experiments on towns like St. Louis, Missouri, by spraying chemicals on unsuspecting residents? Not quite.

Have you perhaps heard that he is actually legendary Texas comedian Bill Hicks, who allegedly died in 1994, but who was actually “recruited by the CIA to become the controlled opposition by the mainstream media” who was “continuously fed approved intelligence by his CIA handlers”?

The rumor gained significant traction earlier this week when The Onion’s A.V. Club ran a story on an independently-produced video which claimed to provide “IRREFUTABLE PROOF that Alex Jones IS Bill Hicks.”

“Poor sheeple, how you have been deceived,” the A.V. Club’s Ben Cannon writes. “According to a new video that you can watch on the Internet (or alternately listen to on the radio in your teeth), Hicks—who passed away in 1994 due to pancreatic cancer—was in fact actually conscripted by the CIA, brainwashed, and now operates as lachrymose agent of agitprop Alex Jones. Misdirection, see? It makes perfect sense.”

Texas Monthly dismissed several coincidences pointed out in the video, which include Alex and Bill having similar facial features, and apparently teeth, as “an interesting thought-exercise, but nothing more.” However, they admit “there’s a question or two worth considering that this video raises nonetheless.”

“Bill Hicks (it bears repeating one more time) died in 1994, so he did not become Alex Jones,” reassures writer Dan Solomon. “But it’s worth considering—given that their shared passion is less about any particular political party, and more about a shared distrust of state power—if, had he lived to 2014, he might have grown to look and sound like him.”

Solomon makes sure to note the fact he is even bringing up the issue means he’s part of the conspiracy.

“There are plenty of good ways to refute this theory, ultimately, but ‘Bill Hicks died in 1994’ is all we really need. (The fact that we both believe this and are publishing it, presumably, makes us part of the conspiracy—can’t wait for the CIA kickbacks, y’all!).”

Indeed, Infowars is also still waiting for those kickbacks.

But as Solomon repeatedly hammers home, Hicks is not Jones. Alex himself addressed the controversy in a somewhat recent interview with producer and documentary filmmaker Kevin Booth, a long-time close friend to Hicks.

“Well even though both of you guys were still alive at the same time… We started the plastic surgery out of the port-a-potty at the public access station,” explained Booth. “We had a team of plastic surgeons behind the port-a-potty, in the dumpster back there making the transformation,” Booth recalled, referring to Alex’s early cable access days.

At beginning of video, Jones addresses theory that he is legendary late comedian Bill Hicks.

Jones later admits their conversation is a “desperate” attempt to engage in “damage control.”

Later in the interview, Booth reminisces on his time spent with Hicks, his last days and his incredible, thought-provoking government-challenging legacy.

Then again, is it merely a coincidence that both Texas Monthly and Infowars are headquartered in Austin, Texas?