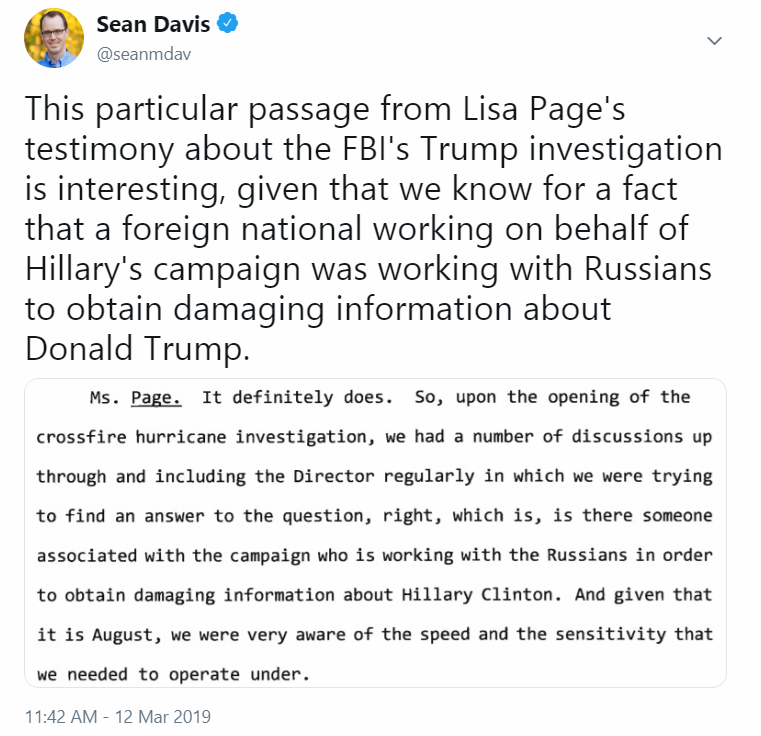 Twitter has admitted to shadowbanning a tweet by The Federalist co-founder Sean Davis in order to “keep people safe.”

Of note, the dossier Steele compiled which was subsequently used to obtain a warrant to spy on a Trump adviser (and later smear Trump) relied on a “senior Russian Foreign Ministry figure” and “a former top level intelligence officer still active in the Kremlin,” according to Vanity Fair.

Is @Twitter experimenting with shadow bans by deleting tweets so others can't see them, but keeping them visible to you while you're logged in? I had to re-publish my original Lisa Page transcript tweet because it was disappeared to everyone but me. pic.twitter.com/RugtpK2MYn

Alex Jones exposes the massive push around the globe to use corporate media to use the New Zealand shooting to smear patriots.

Six days later, Twitter confirmed with Davis that they had deliberately shadow-banned his tweet in order to “keep people safe.”

Titter claimed in its e-mail to me that it "mistakenly remove[d]" a completely anodyne tweet about public congressional testimony, but didn't explain why it left the tweet–and metrics showing no engagement–visible to me when logged in. Is conning users a bug, or a feature? pic.twitter.com/bqtc8Klcam

“Twitter gave me no notice or explanation when it shadowbanned one of my Tweets about Russian interference in our elections,” wrote Davis, adding “But what’s worse is how Twitter apparently gives its users the fraudulent impression that their tweets, which Twitter secretly bans, are still public.”

Twitter gave me no notice or explanation when it shadowbanned one of my Tweets about Russian interference in our elections. But what's worse is how Twitter apparently gives its users the fraudulent impression that their tweets, which Twitter secretly bans, are still public.

In short, Twitter did not want the public to consider the irony of Hillary Clinton’s campaign paying for a foreign national to collude with Russians against Donald Trump, while the FBI scrambled to prove the Trump campaign did.

In other censorship news, ZeroHedge is now banned in New Zealand and much of Australia following our reporting on the Christchurch terror attacks.

Sorry citizen, some facts are just too dangerous for your own good.