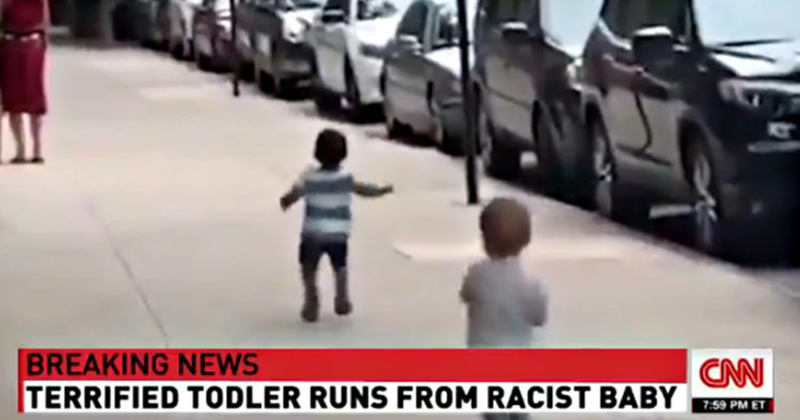 On Thursday evening, President Donald Trump uploaded a video to Twitter showing two toddlers running down a sidewalk, with a mock CNN lower-third superimposed across the screen that claimed the white toddler was racist and chasing the black toddler.

In the obviously satirical meme, emblazoned with creator Carpe Donktum’s name in the corner, dramatic video plays as the two small children run down the sidewalk together, set to dramatic music, with text on the lower-third claiming “BREAKING NEWS: Terrified toddler runs from racist baby” next to the CNN logo.

If the concept were not enough for viewers to acknowledge the video to be satirical in nature, the lower-third contains only two sections compared to the three used by CNN, and also contains exclusively black text, while CNN uses white and black text, and uses a font completely dissimilar to the font used by the cable network.

If a user clicks a hyperlink, “Manipulated media,” provided by Twitter under the tweet, they are redirected to a page that reveals the satirical video to be doctored, and not actually broadcast on CNN.

Owen is shocked to see Facebook has censored the president of the United States, is this treason?

“Video being shared of CNN report on toddlers is doctored, journalists confirm,” the page informs. “Multiple journalists confirmed that the video, which was shared by President Trump, is edited and features a fake CNN chyron. The original CNN story, which is from 2019, reported on a friendship between two toddlers.”

Twitter’s top source on the satirical nature of the meme, which Twitter characterizes as “fake,” is none other than CNN itself, which reveals that the network actually aired a clip of the toddlers embracing as “besties.”

The creator of the video posted by the president responded, also on Twitter, by posting another video of President Trump’s face superimposed atop a fowl that chases the CNN logo superimposed on a small dog.

For its part, CNN has yet to report whether or not  the president truly took the form of a bird and chased the network around a small yard.

President Trump recently signed an executive order that may gut big tech’s immunity from lawsuits if they are proven to censor Americans based on political ideology after Twitter fact checked the president’s claims that mail-in voting would lead to large amounts of voter fraud.