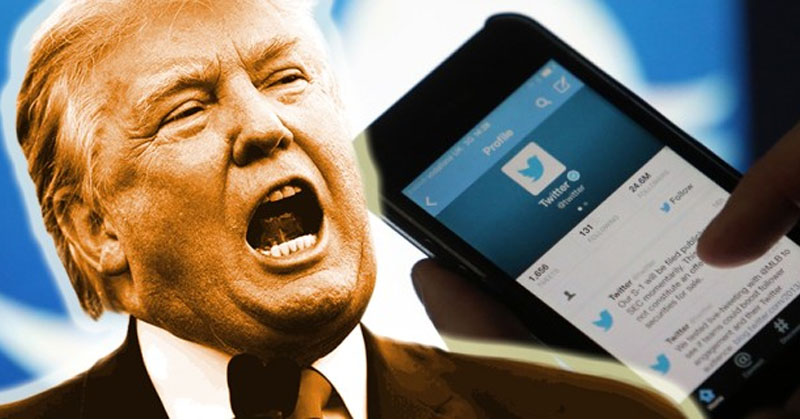 ‘These THUGS are dishonoring the memory of George Floyd, and I won’t let that happen. Just spoke to Governor Tim Walz and told him that the Military is with him all the way. Any difficulty and we will assume control but, when the looting starts, the shooting starts. Thank you!’ the tweet read.

There’s been chaos in the Minnesota city since a white police officer took the life of a black man, George Floyd, by kneeing him in the neck until he stopped breathing.

Trump initially posted it from his @realDonaldTrump account at 1 a.m. Friday.

The company attached a warning label to the tweet saying that it violated the rules.

When the president woke up Friday morning, he began angrily attacking Twitter.

‘Twitter is doing nothing about all of the lies & propaganda being put out by China or the Radical Left Democrat Party. They have targeted Republicans, Conservatives & the President of the United States,’ the president wrote. ‘Section 230 should be revoked by Congress. Until then, it will be regulated!’

He then had the official White House account repost the flagged tweet verbatim, daring the social media company to act.

The @WhiteHouse’s account continued to engage in the battle, by linking to a tweet sent out by Iran’s supreme leader, Ayatollah Ali Khamenei, last week that called for #jihad against Israel.

On the original offending Trump tweet, Twitter put a warning on it less than three hours later, saying it had ‘taken action in the interest of preventing others from being inspired to commit violent acts’. Twitter CEO Jack Dorsey was informed in advance.

The tweet can no longer be liked or replied to and will not be recommended by Twitter’s algorithm, although retweets with comment are still possible – with Trump’s message initially hidden.