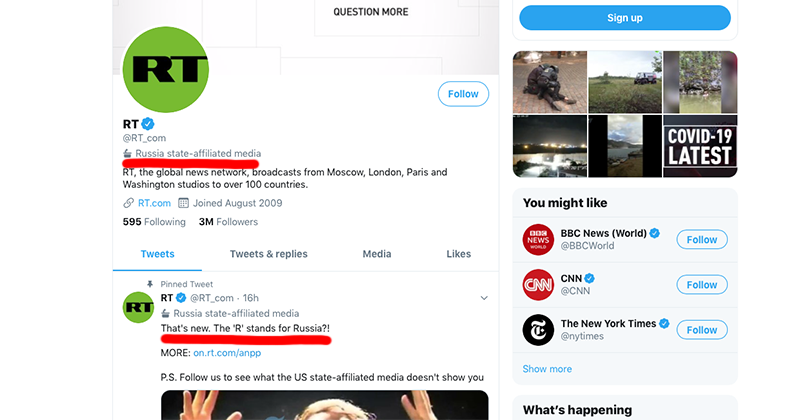 In another bold censorship move, Twitter has decided to label certain accounts as ‘state-affiliated media’, but apparently this extends only to the accounts whose content the platform does not agree with.

Accounts such as RT and Sputnik, Russian news sites, and accounts of people who work or supply content for those websites have been labeled with the tag by Twitter:

P.S. Follow us to see what the US state-affiliated media doesn't show you pic.twitter.com/RxriP09dfj

Twitter also announced that tweets from those accounts will no longer be highlighted on the home screen, in notifications, or in searches.

Effectively, it is an open announcement of a shadow ban.

Twitter claims it is doing this “to make the experience more transparent.”

When it comes to conversations with government and state-affiliated media accounts on Twitter, we’re helping to make the experience more transparent.

We'll now use two distinct profile labels for these types of accounts, so you can easily identify them and their Tweets. (1/2) pic.twitter.com/JW67o422MO

For clarity: we don't let state-affiliated media accounts advertise on Twitter. We’ll also no longer include them or their Tweets in recommendations, as we continue to support a free and independent press.

However, state affiliated media sources that Twitter likes, such as the BBC in the UK and NPR in the US will not be affected by the move.

“State-financed media organizations with editorial independence, like the BBC in the UK or NPR in the US for example, will not be labeled,” the company noted.

Twitter further claims that “unlike independent media, state-affiliated media frequently use their news coverage as a means to advance a political agenda.”

To claim that independent media sources, such as CNN or The New York Times, for example, do not push a political agenda is laughable.

That is made more apparent, given that Twitter says the move was made after meetings with “a number of expert groups, including members of the Digital and Human Rights Advisory Group in Twitter’s Trust & Safety Council.”

That group includes the Anti-Defamation League, the Dangerous Speech Project, and Feminist Frequency, all notorious for pushing censorship of conservative and alternative news content.