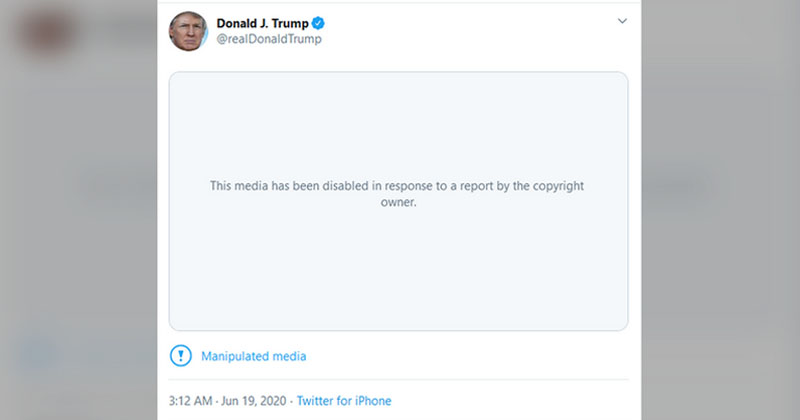 Twitter has removed a satirical video shared by US President Donald Trump – a parody CNN clip it flagged as “manipulated media” – after the broadcaster saw red over the tweet and following complaints from the owner of the footage.

The meme clip, which featured a mock CNN chyron and was meant as a dig at what Trump and his supporters see as biased media coverage of his presidency, was pulled on Friday after a company representing the original creators of the video complained to social media platforms, saying the footage was used without permission. In addition to Twitter, Facebook has also deleted the clip.

The offending video repurposed old viral footage showing two toddlers, one white and one black, running to embrace each other. The spoof clip was captioned “terrified toddler runs from racist baby.”

The meme, which was slapped with a manipulated media tag on Twitter before it was deleted, prompted outcry from CNN.

McEnany shot back, arguing that the video parodied the network’s “misleading headlines.”

“I think the president was making a satirical point… It was a play on CNN repeatedly taking the president out of context,” she said.

While Trump’s detractors raced to declare the takedown a victory, a number of netizens slammed the critics – some singling out Acosta by name – for their inability to “comprehend a meme,” pointing out that the video was clearly a joke.

.@PressSec TORCHES @Acosta after he repeatedly asks questions because he can’t comprehend a meme.

CNN regularly twists the facts and puts misleading headlines on their network.

That was the point of the meme.. pic.twitter.com/IAjtkL2XDS

It’s called a meme. A video was edited to make a funny meme. Defund cnn is also a meme. You really are shallow if you think you’ve got it all figured out

He posted a meme and CNN and you crazy fools took it seriously. Just like that one video where trump body slams CNN.

Others observed that the parody video in question had been on Twitter since last September – the original remains on the platform – yet was only removed after the president decided to post it, one dubbing the move “censorship at its finest.”

Been up since September but now when trump tweets it there’s an issue? Hmm twitter first threw a “doctored image” label on it. And after cnn bitched they removed it from trumps page… censorship at its finest. If you don’t see it you’re part of the problem https://t.co/GiwdjIe3JA

CNN was so hurt about being called out for lying & manipulating for a narrative that they got a tweet Trump shared from a fan taken down. Doesn’t CNN have more important to do? Like “journalism”? ‍♀️ https://t.co/sA6YBQEHq9

The creator of the parody video, an internet personality who goes by Carpe Donktum, has waded into the controversy, thanking Twitter for “millions of dollars in free advertising” and pointing out that no media organization complaining about the video had bothered to contact him about its intended meaning.

Trump tweeting a meme about how CNN spins narratives on social media, which is immediately followed by CNN claiming the REAL story is that Racist Trump is exploiting children, which is then followed by Twitter flagging and removing the video. pic.twitter.com/amZT3qNP43

Trump’s meme-sharing has landed him in trouble with Twitter before, having a number of posts and retweets flagged or outright deleted for violating copyright or “community guidelines.”

Most recently, the platform tagged and hid a tweet for “glorifying violence” after the president warned that “when the looting starts, the shooting starts” amid rioting and unrest in Minneapolis late last month.

Elected officials reacted to Google’s threat of demonetization of the Federalist, which would restrict ad revenues to the news media outlet.