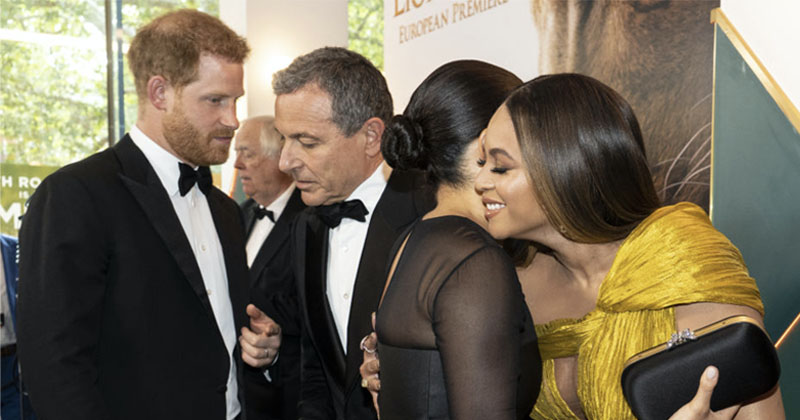 The resurfaced video shows Harry pitching the Duchess of Sussex to Iger about a voiceover gig while Markle chats up music icons Jay-Z and Beyoncé during the “Lion King” premiere in London last July.

Wouldn’t it be a shame if it went viral again? pic.twitter.com/N9oIgKneA5

“You know she does voice-overs?” Harry tells Iger, who responds with, “Oh really? Ah…”

“Did you know that?” Harry asks.

Iger replied, “I did not know that.”

Harry then acts as Markle’s agent, inquiring about a possible job for her at Disney.

Users on Twitter called out the shameless elitist ingratiating.

Fascinating clip – showcases the worst of cronyism: a brazen display of influence-peddling, among elites of government, big business, and Hollywood… https://t.co/2jwkMigcgQ

I cannot get over how cringey and debasing this is https://t.co/1Y7WhYDZ6O

I noticed it was deleted in a lot of threads.. imagine being such a p***y of a man that you would have to delete this? Wtf is happening ? Good grief https://t.co/mF61FbtKN8

Markle is the Yoko Ono of the royal family. Poor Harry, got caught up in the strange. Even Wallis Simpson was respectful of British royalty where Meghan wasn’t. I’m sure the queen has stated to the great grant kids, don’t marry an American. Dump Meghan.

Soon enough, Twitter attempted to remove the video from its platform.

Other videos of Markle appearing to control Harry’s behavior have also gained attention following their recent unprecedented split from the Royal Family.

Body language says it all pic.twitter.com/QVVPS0U3qL

Here is longer videoclip, you see that Harry was talking to them. pic.twitter.com/t00gmjwCFp

Last week, the royal couple announced their withdrawal from senior royal duties and intent to move to North America – likely Canada, as Markle is Canadian – which has outraged Queen Elizabeth and the rest of the Royal Family.

The couple is set to have a sit-down meeting with the Queen, Prince William, and Prince Charles over how to deal with their unusual departure going forward.

Prince Andrew is the first in Royal history to be booted from the offices of Buckingham Palace.