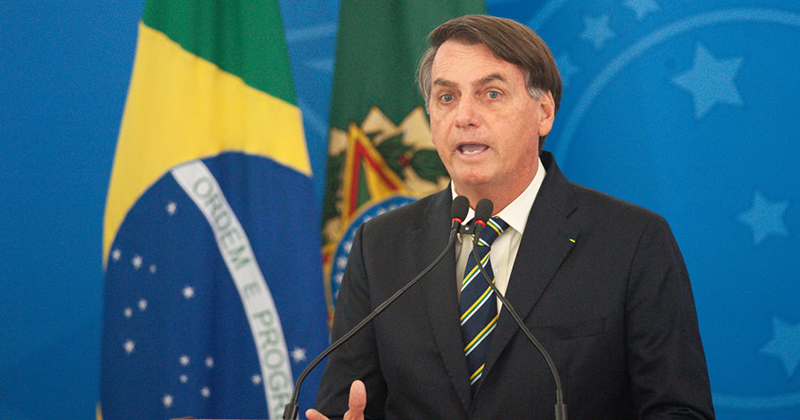 In an unprecedented move, Twitter has yanked two posts by Brazilian President Jair Bolsonaro, in which he took aim at coronavirus lockdowns as part of his controversial campaign to avoid a shutdown of the economy.

Bolsonaro has become the first ever head of state to have his tweets censored by the platform under recently-updated guidelines, requiring users to remove content that defies “global or local health authorities recommendations” aimed at halting the spread of the deadly disease that has already taken hold in the Latin American country.

I could be mistaken but I'm pretty sure these two tweets from Bolsonaro – showing videos of himself going into crowds in Brasilia, hyping hydrochloride as a cure, and encouraging an end to isolation – are the first of a world leader to be deleted by Twitter for rules violation: pic.twitter.com/Qlf7YNXtBC

The Brazilian leader, who has been adamant that economic damage from lockdowns is a price too high to pay for lowering health risks, made a trip to a street market on Sunday, mingling with crowds and chatting with street vendors.

The videos, posted by Bolsonaro in the wake of the visit, apparently ran afoul of the Twitter guidelines. In one of them, Bolsonaro assures a street seller that he was “not going to die” due to the measures to combat the pandemic.

“What I have been hearing from people is that they want to work,” the president, dubbed dubbed the “Trump of the Tropics,” reportedly said.

In another video, the Brazilian leader reportedly took a swipe at local governors for ordering non-essential commerce to close and imposing a ban on public events.

Twitter did not elaborate why it chose to erase the videos, referring to its new guidelines instead. “Twitter recently announced… the expansion of its rules to cover content that may be against public health information directed by official sources and that could put people at greater risk of transmitting Covid-19,” it said in a statement to Brazilian G1 portal.

Despite growing increasingly at odds with his own Health Ministry, Bolsonaro argued that only those with pre-existing conditions and the elderly should be isolated. However, an attempt by Bolsonaro to promote his views on the pandemic was cut short by a court on Saturday, as it outlawed the “Brazil can’t stop” social media campaign, which was launched by his office in support of the ‘pro-business’ cause.

Bolsonaro, however, has so far has brushed off mounting concerns over him downplaying the dangers of the disease, suggesting that the death toll in the country was likely overstated, while comparing Covid-19 fatalities to “traffic deaths.”

“You can’t stop a car factory because of traffic deaths,” he said on Friday.

A total of 4,256 people in Brazil have tested positive for the coronavirus as of Sunday, according to the data by Johns Hopkins University. At least 136 of those infected died.