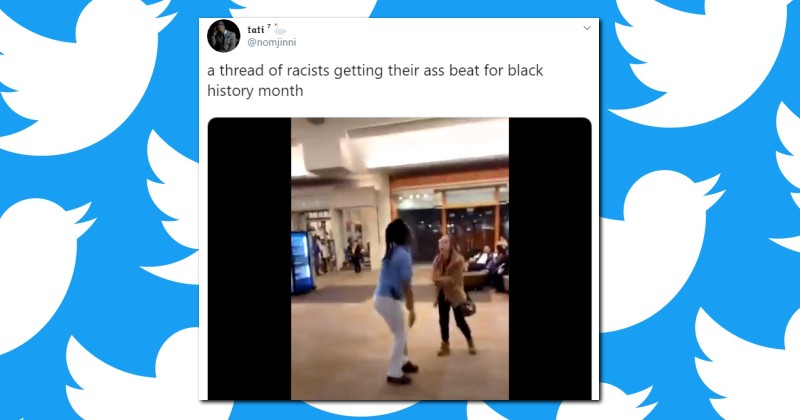 A Twitter thread comprising entirely of white people “getting their ass beat for black history month” has received over 335,000 likes on Twitter despite being a clear violation of Twitter rules.

The thread features white people being violently attacked. In some cases, the confrontations are provoked by allegations of racism but other examples just appear to be random fights.

The user who posted the thread – @nomjinni – locked down their account shortly before this article was published meaning the thread is no longer visible.

The rule also specifies that glorification of violence against a specific race is prohibited, but the thread remains up.

“Videos glorifying and encouraging violence will be quickly removed by Twitter…unless they’re of black people assaulting white people. Then they’ll get hundreds of thousands of likes celebrating it,” wrote Mark Dice.

Videos glorifying and encouraging violence will be quickly removed by Twitter…unless they’re of bIack people assaulting white people. Then they’ll get hundreds of thousands of likes celebrating it.

Numerous other respondents in the thread glorified the violence seen in the clips and posted their own violent videos.

Imagine if a white supremacist posted an entire thread of black people being beaten up. They’d be banned within minutes if they were lucky. If their identity became known, the media would probably attempt to ruin their life.