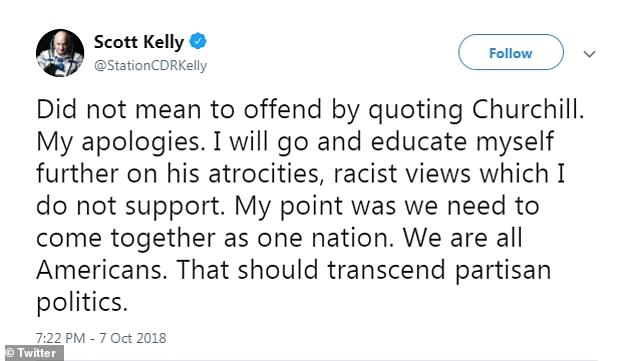 But he also came under fire for apologizing from critics who accuse Kelly of caving into a Twitter hate mob and point out that Churchill is ‘one of the greatest figures in history and helped defeat the Nazis’.

On Sunday, Kelly tweeted: ‘One of the greatest leaders of modern times, Sir Winston Churchill said, “in victory, magnanimity.” I guess those days are over.’

Some modern day critics despise Churchill for his racist colonial views and acts including blaming him for a famine in India that killed 3 million in 1943, the use of mustard gas on the Kurds and Afghans in 1919 and frequent racist statements such as claiming whites were a ‘stronger, higher-grade and a more worldly wise’.

However others take a more nuanced view that Churchill was a product of his era, when racist views were widespread and his defining act of defeating the Nazis means he should be admired as one of the greatest figures in history.

However, Kelly, who has commanded three International Space Station Expeditions, still felt the need to remove his Tweet and publicly apologize following a deluge of criticism from Churchill’s detractors.

The astronaut was mercilessly trolled on Twitter by users who said he needed to ‘educate himself’ on the man who helped win the Second World War.