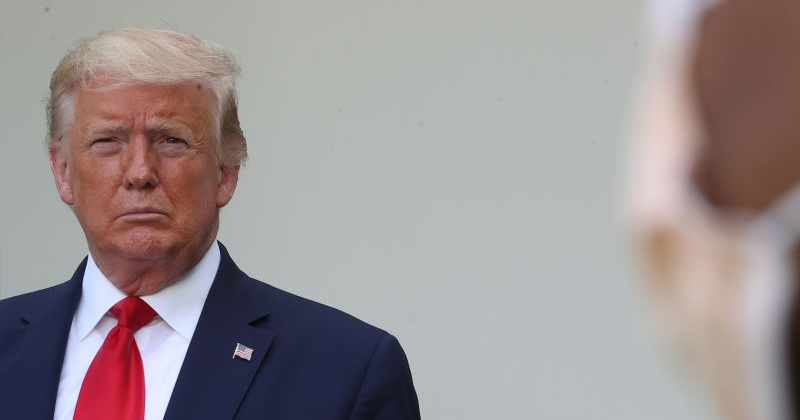 Twitter opened a new battlefront in the 2020 US election by ‘fact-checking’ posts by President Donald Trump to say he was wrong about voter fraud. That would normally be the end of the story – except nothing about this is normal.

On Tuesday, Twitter took the unprecedented step of posting a link under the two tweets – made by the president on his personal account – listing a bunch of mainstream media articles to assert that “fact-checkers say there is no evidence that mail-in ballots are linked to voter fraud,” and therefore Trump’s opinion about the matter is factually wrong.

The move followed a campaign by mainstream media and Democrats to censor Trump over other tweets, insinuating that the intern for former congressman and current MSNBC host Joe Scarborough may not have died accidentally, which culminated in a demand for Twitter to “cleanse the Trump stain” in a New York Times op-ed earlier on Tuesday.

Try as they might, Twitter couldn’t find any violation of their ever-shifting rules to pin on Trump, so they did the next best thing and “fact-checked” him. No doubt, whoever came up with this figured it was a really clever way to appease the outrage mob. Sure, the Trump 2020 campaign would protest the bias – and reveal in the process that they pulled advertisements from Twitter months ago – but they can be brushed off, unlike the chorus of his critics.

Then the White House Press Secretary fired off a thread filled with recent stories about mail-in ballot problems – forms being mailed to the dead or people who’d long since moved away, a Philadelphia judge just convicted for stuffing the ballot box, etc. – clearly showing the Twitter “fact checkers” had some explaining to do.

That should not come as a surprise to anyone. After all, these are the same outlets that have peddled the Russiagate conspiracy theory with impunity for the past four years, and even racked up prestigious awards for the blatantly fraudulent coverage. Mainstream media archives are littered with “bombshells” designed to first prevent Trump’s election, then inauguration, then get him impeached or otherwise removed from office. Every single one turned out to be a dud.

“But Trump lies! Constantly!” scream in unison the people used to being not just gatekeepers of “respectable discourse” but the tone police of Washington, the arbiters of the acceptable, the people who believe their pen shapes the very fabric of reality. People who headline their stories with “what you should know” and “how you should think.”

When challenged, they form ranks and scream they are being unjustly attacked and “delegitimized” – but only if it’s one of their mainstream colleagues called out for their excesses. Anyone else, from Julian Assange to alternative outlets, can rot because the precious First Amendment doesn’t apply to them, supposedly.

CNN had to settle a lawsuit after defaming a teenager from Covington, Kentucky. To avoid a similar fate, MSNBC’s Rachel Maddow argued that when she says “literally” that’s not news but humorous hyperbole, essentially dismissing her entire show as fake news.

It’s telling that this very phrase – fake news – has become synonymous with Trump’s criticism of the media, even though it was originally used by Hillary Clinton as an excuse for losing the 2016 election. You know, the election the mainstream media gave her 98 percent chances of winning almost to the very end, and openly endorsed her at the same rate?

If you thought Clinton took that loss hard, though, you clearly haven’t been paying attention to the media. Trump’s victory was an existential crisis for them, the moment their power to dictate the shape of reality itself was exposed as a mirage.

This is why they’ve spent the past four years lobbing Russiagate and other ‘bombshells’ at him. This is why they have led the outrage mobs, not just against Trump or the millions of “deplorables” that voted for him, but also against the social media platforms he used to bypass them in 2016, so he wouldn’t be able to do that again this November. Don’t think for a second any of this is about mail-in ballots, which – much like immigration and other issues – Democrats themselves once used to be against.

When they wrote freedom of speech into the Constitution, America’s founders may not have imagined that a president would be an unlikely champion of it, while the “free press” would be clamoring for censorship to preserve its power. Yet here we are.