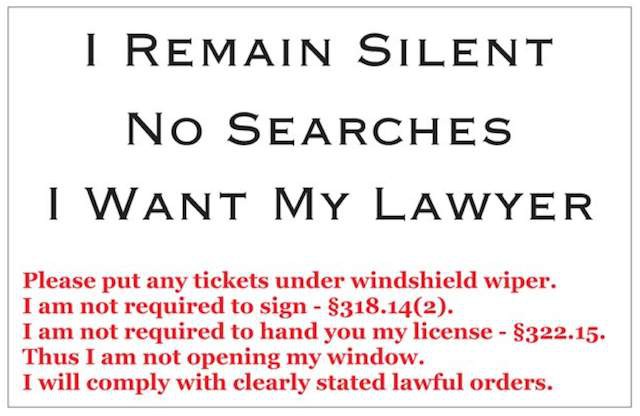 Nearing two million views so far, the video that PINAC reporter Jeff Gray uploaded from a DUI checkpoint on New Year’s Eve is by far the most viral of all his videos on his Honor Your Oath Youtube channel, reposted on news sites throughout the country, showing him driving through a checkpoint with his window rolled up and his license, registration and proof of insurance hanging out the window in a plastic Ziploc bag.

The Florida Highway Patrol officers and Levy County sheriff’s deputies conducting the checkpoint were curious, but not nearly as aggressive as you might expect.

Everything they needed to know was spelled out in the Fair DUI flying that was also included in the bag, stating the following:

The Fair DUI flyer is the creation of South Florida attorney Warren Redlich, who once represented PINAC reporter Taylor Hardy pro bono in a case where Hardy was arrested for taking photos in public, but the case was dismissed when the cop never showed up to court.

Redlich also ran for New York governor in the 2010 race under the libertarian platform, so he’s not apt to unreasonable search and seizures.

While it’s not likely the Levy County deputies have encountered such a flyer before, they are probably well aware of Gray, being part of the network of law enforcement agencies who have stalked Gray for years through the Florida Fusion Center.

So they probably had a good idea of what he was trying to do.

The fact that the three other occupants in the car were holding up cameras also probably tipped them off that they were the subject of one of Gray’s infamous audits.

After all, Gray was completely within his rights to drive through the checkpoint without saying a word, simply by presenting them with the required information as long as they did not have any probable cause to detain him.

But this being Florida, not every law enforcement officer has grasped this reality.

Two sheriffs in particular, Lee County Sheriff Mike Scott and Pinellas County Sheriff Bob Gualtieri have publicly threatened to arrest Gray if he dared try that antic in their counties.

According to The Blaze:

“I challenge him…to please come to Lee County and drive around,” Lee County Sheriff Mike Scott said. “Eventually he’ll find one of our checkpoints and he’ll try his luck. He’ll go to jail.”

And according to Fox 13 in Tampa:

We showed the video to Pinellas County Sheriff Bob Gualtieri. He said try it in Pinellas and you’ll be arrested.

“Just because you dangle in a bag with your drivers license, insurance card and registration out the window doesn’t mean you’re not drunk.”

It might mean you’re not drunk, but as long as you’re not showing any other signs of impairment, they are bound by law to accept the so-called dangle in the bag.

So look for a future story when Gray, joined by Redlich and other PINAC crew members, take them up on their challenge to see if they actually do open themselves up to a lawsuit as they promise.

We would have several camera angles of the arrest, which would make for good evidence in court.

Redlich, who operates the site, Fair DUI and has also written a book on the topic, stated the following about the sheriffs’ threats.

We will continue to fight for the Constitution and to expose government officials who fail to honor their oaths.

These sheriffs are a disgrace to their position and uniform. Their threats to disregard the Constitution unfairly diminish all the good cops in all the checkpoint videos we’ve done so far.
Check out the video below.