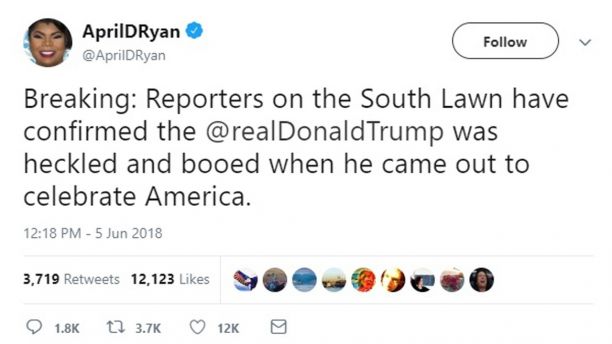 Two men took a knee Tuesday as President Trump assembled a group of Marines and patriotic Americans to celebrate America.

The festivities were held at the White House after the President decided not to host an event honoring Super Bowl LII winners the Philadelphia Eagles.

“The Eagles wanted to send a smaller delegation, but the 1,000 fans planning to attend the event deserve better,” Trump said in a statement.

Jounalists from Denmark and Sweden captured one unidentified man in a white shirt kneeling during the anthem.

At The White House. One guy in the audience took a knee during the national anthem at President Trumps celebration of America no Eagles event. Left right after – didn’t wanna talk pic.twitter.com/NLRGp26gln

CNN’s Noah Gray also commented that another man photographed kneeling toward the front of the crowd had also been booed earlier for heckling the President.

The man who was booed after shouting @ POTUS also took a knee during the anthem but appears to also sing the anthem while kneeling, based on pic by Olivier Douliery/ TNS. (He was behind me & I didn't turn around until I heard him shouting) pic.twitter.com/qwuqpEXrOE

After being called a cowboys fan after shouting @ POTUS, protestor shouted “let’s hear it for the Eagles!” pic.twitter.com/KtEwAhOj6I

After the anthem, this man shouted “stop hiding behind the armed services & the national anthem.” He was booed then called a Cowboys fan pic.twitter.com/ZjfDGLFbxB

The boos caused CNN contributor April Ryan to claim that several people in the crowd had booed President Trump as he walked up to the podium.

“Breaking: Reporters on the South Lawn have confirmed the @realDonaldTrump was heckled and booed when he came out to celebrate America,” Ryan tweeted.

Ryan’s own CNN peer later corrected her, saying the boos were intended for the man who heckled the president.

This is not true. There was a protester who shouted at Trump and was booed. https://t.co/6zOSCifHFi

That forced Ryan to delete her original tweet and issue two tweets back-tracking on her previously “confirmed” reporting.

Breaking: reporters are rewatching the event and found a heckler in the crowd started asking questions of @realDonaldTrump and the heckler was booed. The heckler was escorted out of the event. The booes were for the heckler

The original breaking boo tweet was deleted as reporters on the South Lawn who told of the booign and heckling did not see all of what happened on the other side of the lawn. After the tape was watched the heckler was booed not @realDonaldTrump

At the event, where the National Anthem was played “loudly and proudly” by the US Marine Band and US Army Chorus, Trump explained why standing for the anthem is important.

“I want to take this opportunity to explain why young Americans stand for our national anthem,” Trump told the audience. “We stand to honor our military and to honor our country and to remember the fallen heroes who never made it back home. We stand to show our love for our fellow citizens and our magnificent Constitution. We stand to pay tribute to the incredible Americans who came before us and the heroic sacrifices they made.”

Watch the event below: