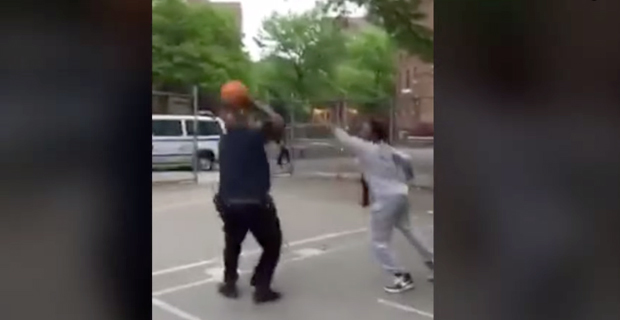 Shocking footage has emerged of two New York City police officers unleashing a brutal smack down on a bunch of kids… during a game of basketball.

An NYPD van can be seen parked in the background, as two unidentified officers engage a group of teens with layups, crossovers and three-point shots.

“They really cooked us,” one person who was at the game commented on social media.

Others who viewed the video, which was uploaded to Facebook, were pleased the officers were doing their best to salvage their tarnished reputation, which has been damaged in part by media reports that overstate the frequency of police shootings of minorities.

“Nice to see cops doin’ something good for once,” another Facebook user remarked.

The video has been shared over 75 thousand times and has amassed over three million views in just under four days.

“This is an example of the goodwill police can cultivate every day, under the radar,” notes Uproxx.com.

“It’s also a textbook way to engage the communities where police officers are often feared, and sadly, living in fear themselves. Pickup basketball may not erase crime, but it will go a long way toward bridging part of the perception gap between law enforcement in the news and law enforcement in real time.”

Just last week, an officer in South Carolina also made headlines after he stopped to play a game of football with some neighborhood kids.