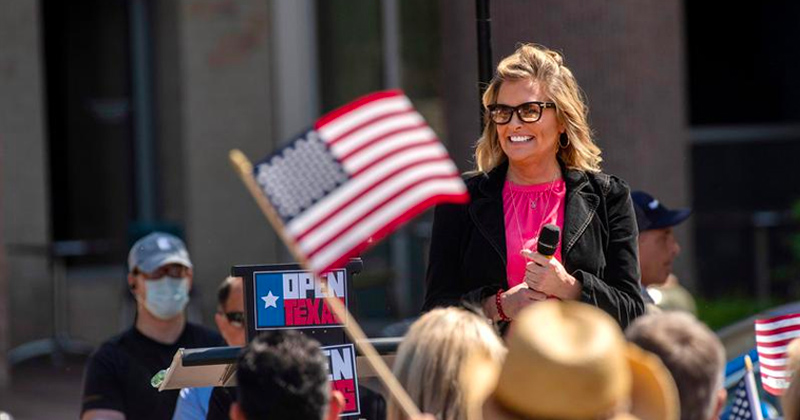 The Dallas salon owner who made headlines earlier this year after being imprisoned for defying lockdown orders has launched a Texas Senate campaign.

On Friday, Luther’s name appeared among a list of candidates vying for the Senate District 30 seat.

Luther made headlines in April after she was thrown in jail for defying lockdown orders and opening her salon to the public, arguing she and her employees needed to feed their children.

More on her case from CBS DFW:

During a court appearance in May, Dallas judge Eric Moye found her in contempt of court after she refused to apologize for her actions, which included publicly tearing up a cease-and-desist letter from the county, and sentenced her to seven days in jail. With the help of state leaders like Attorney General Ken Paxton and Gov. Greg Abbott, she was set free two days after sentencing.

In a press release last week, Luther slammed the “Austin establishment” which she says she has to go straighten out because it “isn’t working for the people.” One post shared on her Facebook describes her as Gov. “Abbott’s worst nightmare.”

“I’m just a normal person whose life and livelihood was threatened by the government. I realize the need for real people who recognize the real problems that face our state,” Luther said in the press release.

Luther is also starting to make her rounds on national media, appearing on Fox & Friends on Saturday morning.

She’ll be competing in a Sept. 29 special election against five other candidates to fill a vacancy left by TX Sen. Pat Fallon, who’s replacing former US Rep. John Ratcliffe (R-TX) on the ballot in November.

The American Deep State is showing signs of desperation and weakness