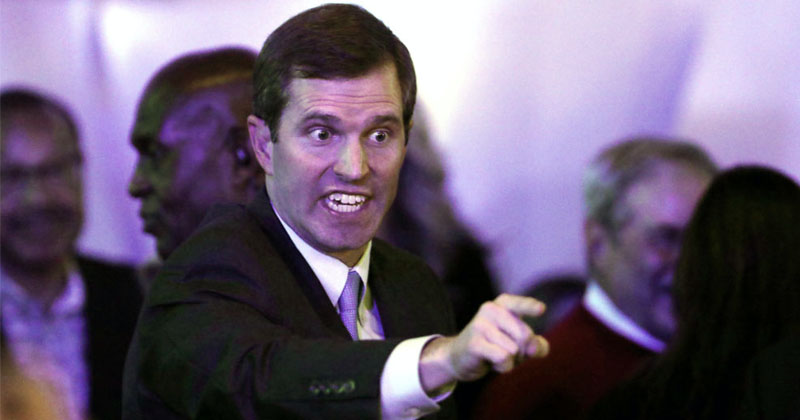 Kentucky’s Democrat Governor Andy Beshear has issued a draconian mandate ordering authorities to record the license plates of Easter Sunday church goers and then quarantine them for two weeks.

“Those who attend these gatherings can expect public health officials to show up at their doors with mandates that they self-quarantine for 14 days,” Beshear said Friday.

“If you’re going to expose yourself to this virus, it’s not fair to everybody else out there that you might spread it to. Understand, this is the only way we can ensure your decision doesn’t kill somebody else.”

Taking license plates at church? Quarantining someone for being Christian on Easter Sunday? Someone needs to take a step back here.

Kentucky Governor Announces Plan to Record License Plates of Easter Church Goers and Force Them to Quarantine for 14 Days https://t.co/z7U42liQRh

When Dem officeholders are sworn in, do they issue jack boots at that time, or do they arrive later in the mail? #StopPersecutingFaith https://t.co/X8HCcTtnUk

Even Kentucky’s Attorney General Daniel Cameron pushed back against the unconstitutional order, calling it “the definition of arbitrary.”

“Directing a uniformed presence at church services to record the identity of worshippers and to force a quarantine, while doing no such thing for the people gathered at retail stores or obtaining an abortion, is the definition of arbitrary,” Cameron tweeted Saturday.

Directing a uniformed presence at church services to record the identity of worshippers and to force a quarantine, while doing no such thing for the people gathered at retail stores or obtaining an abortion, is the definition of arbitrary. (2/2) https://t.co/zwS9Nz9yPc

Beshear isn’t the only Democrat on a power trip.

New York City Mayor Bill de Blasio also threatened to come down hard on Easter church services, saying if people gathered to worship then police would “have no choice but to shut down” the service.

“So, I want to say to all those who are preparing the potential of religious services this weekend – if you go to your synagogue, if you go to your church and attempt to hold services after having been told so often not to, our enforcement agents will have no choice but to shut down those services,” de Blasio told reporters last week.

“I don’t say that with any joy. It’s the last thing I would like to do because I understand how important people’s faiths are to them, and we need our faiths in this time of crisis, but we do not need gatherings that will endanger people.”

How many arrests or quarantines of Easter Sunday worshipers will take place in Democrat-controlled states? Only time will tell.

No more than 10 people but Baltimore police raid a church meeting with only 10 people. Grocery stores are open. Hardware stores are open. But sorry, says Trump, but churches must close. His boss, Fauci, says so. Gov Abbott of Texas disagrees and overturns orders of local dictators in Houston, San Antonio & Bastrop who have order churches closed.