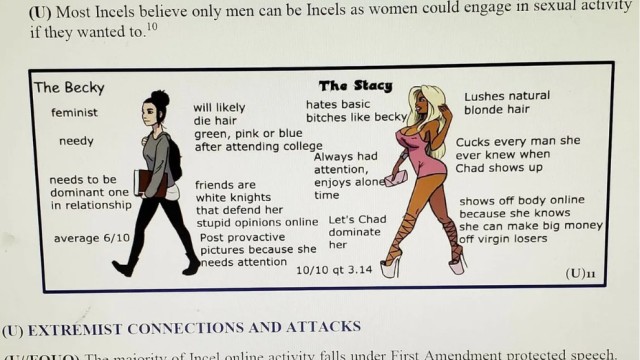 Personnel at a U.S. Air Force base in in Maryland were recently briefed on the nationwide threat posed by the incel movement.

Incels are members of an Internet subculture based on “involuntary celibacy,” which is borne out of their failure to attract women and subsequent hatred of women.

Some adherents have turned to violence in recent years, including 22-year-old Elliot Rodger, who shot and killed six women in Isla Vista in May 2014 in “retribution” for being rejected by females.

25-year-old Alek Minassian also used a van to run over and kill 10 people during an April 2018 attack in Toronto which he intended to speak an “incel rebellion”.

Following the leak of a screenshot posted to Facebook depicting a typical meme shared by members of the incel community, it was confirmed that this was part of a threat briefing given to personnel at Joint Base Andrews in Maryland.

“The screenshot was taken from a Joint Base Andrews Intel brief created following basic threat analysis on an increase in nationwide activity by the group,” 11th Wing spokesman Aletha Frost told Task & Purpose.

The briefing concerned an “increase in nationwide activity” by incels and the security threat this may pose to personnel.

“The intent of the brief was to educate the Joint Base Andrews commanders on the behaviors and activities attributed to the group to safeguard our Airmen/installation,” said Frost.

It is not known if any other Air Force bases or military personnel have received briefings on the incel threat.