The U.S. Army admitted Thursday to blocking employees’ access to The Guardian which broke the NSA spy gate scandal.

This rampant restriction to truth has been ongoing since June 6 when Glenn Greenwald exposed the NSA for collecting millions of Verizon phone records every day.

The Department of Defense refers to the censorship as “network hygiene” to cleanse military servers of “unauthorized disclosures of classified information,” according to Gordon Van Vleet, a spokesman for U.S. Army NETCOM in an e-mail to the Monterey County Herald.

The California newspaper began investigating after employees of the Presidio of Monterey, an army garrison, started complaining.

“We make every effort to balance the need to preserve information access with operational security,” Van Vleet said in the e-mail. “However there are strict policies and directives in place regarding protecting and handling classified information.”

“The DoD is also not going to block websites from the American public in general, and to do so would violate our highest-held principle of upholding and defending the Constitution and respecting civil liberties and privacy.”

An ironic statement considering the NSA and the behemoth cyber-industrial complex hold no such principle as they betray our Constitution in their attack on our cherished civil liberties and privacy.

But according to army brass, this gross assault on our basic human rights and the foundation of our republic is simply a classified information leak by a foreign media outlet that requires purging through routine, automated maintenance.

According to them, classified information must be protected, even if its evidence that the NSA’s unreasonable search and seizures are so far reaching, the physical size of the drag net could stretch most of the distance to Mars: 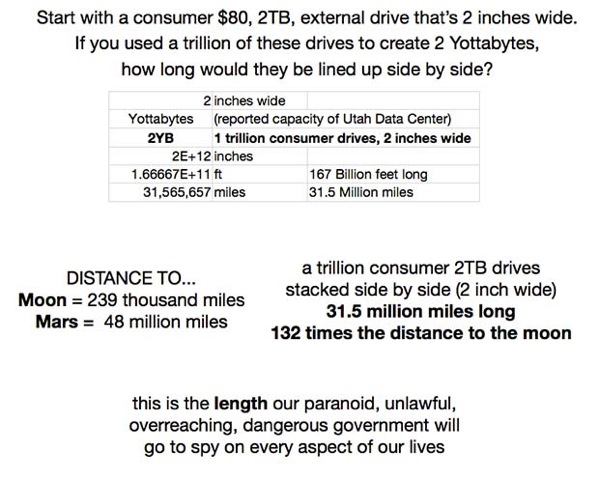 The army blackout of The Guardian has not been the only DoD response to the spy grid scandal. Earlier this month, the U.S. Air Force released a Notice to Airmen, warning service members that reading news stories on the Verizon phone records collection could constitute a punishable offense.