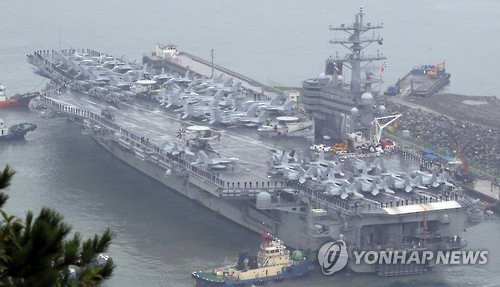 Today, the South Korean and U.S. navies kicked off massive combined drills off the coast of the Korean peninsula amid heightened tensions, a training exercise which North Korea has warned may prompt another ballistic missile launch potentially to coincide with the launch of the Chinese 19th Party Congress on October 18.

The two allies plan to continue the Maritime Counter Special Operations Exercise (MCSOFEX) through Friday in the East Sea and the Yellow Sea.

As reported over the weekend, the drill involves the U.S. 7th Fleet’s aircraft carrier USS Ronald Reagan (CVN-76) and two Arleigh Burke-class destroyers – the USS Stethem (DDG-63) and the USS Mustin (DDG-89). The carrier strike group will train with South Korean warships and other defense assets, such as the Sejong the Great Aegis ship and P-3 Orion anti-submarine aircraft in the East Sea.

And while details of the drill were well-known in advance, what was reported for the first time overnight from Yonhap is that a unit of U.S. special forces tasked with carrying out “decapitation” operations is also aboard a nuclear-powered submarine in the group, according to a defense source. So far, little else is known about why said decapitation team is on location, or whether it will be put into use, although it presence may explain Trump’s “calm before the storm” comment that beffudled the media two weeks ago.

Among other assets mobilized for the joint drill are F-15K, FA-18 and A-10 fighter jets, as well as AH-64E Apache attack helicopters, Lynx and AW-159 Wild Cat naval choppers. The U.S. has also deployed a Joint Surveillance Target Attack Radar System (JSTARS) plane to closely monitor the North’s ground and naval forces.

Some more details about the drill from Yonhap:

The joint training is aimed at promoting “communications, interoperability and partnership in the (U.S.) 7th Fleet area of operations,” the fleet said. It initially announced that the practice around the peninsula will end next Thursday but later corrected the date to Friday. Meanwhile, the U.S. has sent a B-1B Lancer strategic bomber, F-22 Raptor stealth fighter jets and several other types of high-profile defense assets to the Seoul air show to open this week.

“Approximately 200 U.S. personnel are expected to participate in the Seoul International Aerospace and Defense Exhibition (ADEX) 2017, scheduled from Oct. 17-22 at the Seoul K-16 airport,” the 7th Air Force said.

“This year’s air show will feature demonstrations from U.S. Air Force F-22 Raptors assigned to the 3rd Wing, Joint Base Elmendorf-Richardson, Alaska,” the 7th Air Force said. More than 400 defense firms from 33 countries plan to participate in the ADEX to begin Tuesday.

As part of the drills, the US military said on Monday that it would practice evacuating noncombatant Americans out of South Korea in the event of war and other emergencies, the NYT reported. The evacuation drill, known as Courageous Channel, is aimed at preparing American “service members and their families to respond to a wide range of crisis management events such as noncombatant evacuation and natural or man-made disasters,” the United States military said in a statement.

The South Korean government of President Moon Jae-in has repeatedly warned that it opposes a military solution to the North Korean nuclear crisis because it could quickly escalate into a full-blown war in which Koreans would suffer the most, with some estimates predicting that over 2 million South Koreans could die in the North Korean retaliation.

Meanwhile, on Monday, North Korea accused the US of “pushing” the DPRK into making a hydrogen bomb, the head of North Korea’s delegation to the multinational Inter-Parliamentary Union (IPU) meeting has said.

“Exactly the US have pushed the DPRK [Democratic People’s Republic of Korea] to become a possessor of the hydrogen bomb,” the deputy chairman of the Supreme People’s Assembly of North Korea, An Tong Chun, announced Monday. The North Korean official was speaking at the assembly of the world’s oldest international body of lawmakers in St. Petersburg, Russia. Parliamentarians from more than 160 nations are attending the IPU session.

The question now is whether North Korea will once again test said Hydrogen bomb and, if so, whether the crack “decapiation” team meant to take out North Korea’s leadership will be put to use.