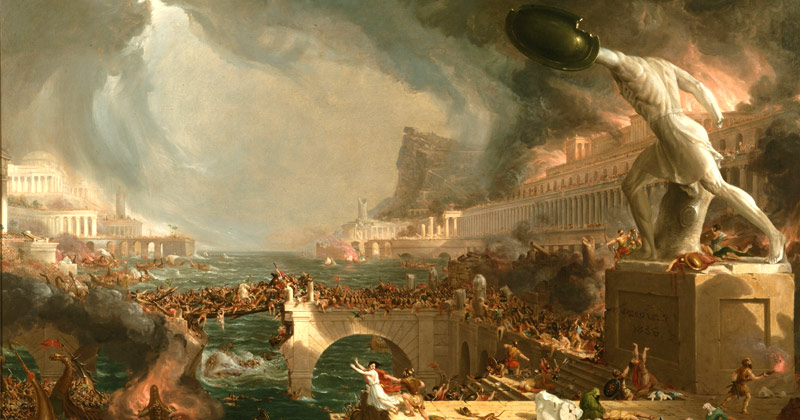 An American industrialist once described the rise and fall of historic civilizations as an eight step cycle, and western society fits well into step six while risking a rapid advance into the hellscape of step seven and beyond.

In 1943, Henning Webb Prentis Jr. wrote what was later called the Prentis Cycle which describes an eight step cycle of civilization:

And the cycle thus returns to the beginning.

“The release of initiative and enterprise made possible by popular self-government ultimately generates disintegrating forces from within,” Prentis stated. “Again and again after freedom has brought opportunity and some degree of plenty, the competent become selfish, luxury-loving and complacent; the incompetent and the unfortunate grow envious and covetous, and all three groups turn aside from the hard road of freedom to worship the Golden Calf of economic security.”

To describe step six of the Prentis Cycle (which is often misattributed to Alexander Tytler), it’s the point where many lose the sense that they must work hard to achieve prosperity. Instead, they grow too comfortable living off the sacrifices of previous generations. A microcosm of this is the all-too-common 30-year-old man still living on his parents’ couch.

The act of taking without giving grows commonplace to the point where it emerges as a rising political ideology. Hard work, patience and discipline crumble away like rust hit by wind.

Does this sound a lot like the current state of America? Unfortunately, today’s cultural climate also bears striking similarities with step seven, from apathy to dependence.

At this stage, an increasing number of people don’t have the ability – or even the desire – to work fruitfully. Dependence of the system is seen as the only means to provide their basic – and even their indulgent – needs.

The idea of self-determination fades away as the masses give more power to politicians who promise more “free stuff.” Remember the rollout of the Green New Deal that promised “economic security” to those “unwilling to work?” Furthermore, just compare step seven to the campaign platforms of several presidential candidates.

The good news, however, is that weak times create strong people – and the cycle will eventually wind its way back to the beginning where bondage gives way to spiritual fulfillment and the resulting prosperity.

Norm Pattis brings his legal expertise to The Alex Jones Show and explains how common law forged by liberty is giving away to an authoritarian agenda.