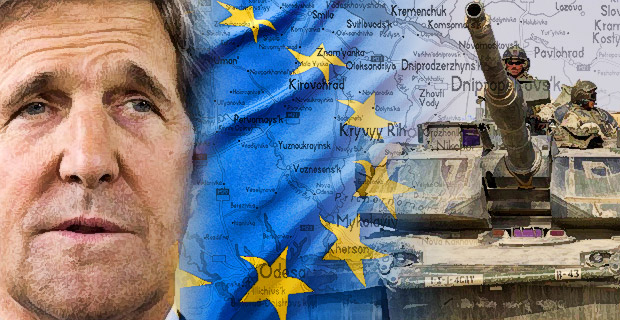 So, let’s get this straight. The United States is all for democracy and democracy is about voting and making sure the majority rules. If a majority in Crimea votes to align itself with Russia because most Crimeans have an affinity for Russia, the United States and the United Nations, the latter sitting on the lap of the former, will decide democracy is illegal.

Earlier today Estonian Defense Minister Urmas Reinsalu said he’s sure Russia plans to invade Ukraine. This was carried uncritically and sans any objective examination by the corporatist establishment media in the United States:

Urmas Reinsalu is the leader of the Union of Pro Patria and Res Publica. Pro Patria has interesting partners. For instance, the International Republican Institute. IRI is infamous. It specializes in color revolution. This is well-known just about everywhere except the United States where the corporate propaganda media holds an inexplicable voodoo trance over the boobeoise. Even The Guardian reported it. Reinsalu and Pro Patria are also hooked up with the Konrad Adenauer Foundation, a political organization out of Germany that is aligned with transatlantic interests, in other words with neocons over on the other side of the pond. They also rubs elbows with the European People’s Party. The EPP describes itself as “center-right” and is the largest party in the European Parliament and the European Commission. The so-called “founding fathers” (sic) of the European Union hail from the EPP, so you get an idea of Mr. Reinsalu’s mindset and who he answers to.

Incidentally, the fathers of the founding fathers of the EU were Nazis. Maybe that’s why the EU is using Hitler’s Big Lie to its fullest potential now.

Despite the obvious bias of Reinsalu’s comment – and the ignored fact Ukraine has admitted there are no Russian troops on the border poised to strike – the media in the United States is now running around like Chicken Little screaming that the sky is falling, Russia will invade Ukraine, and the world demands we do something.


We, of course, means the establishment because, as polls show, the American people want nothing to do with the whole sordid affair.