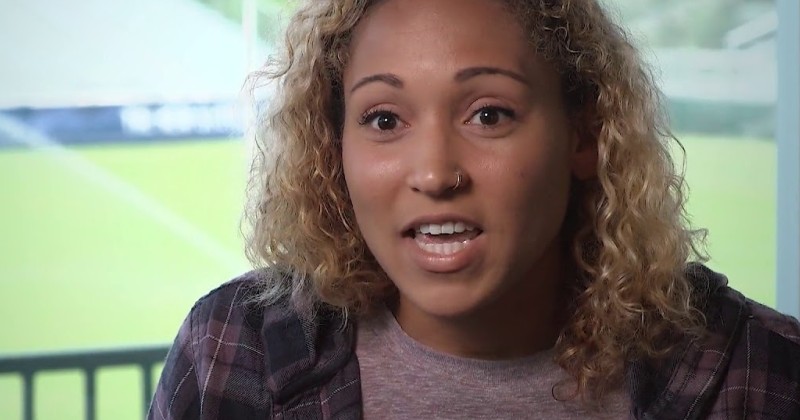 Speculation is building about whether a U.S. Women’s soccer star dubbed one of the best players in the country was snubbed for selection by the team because of her openly Christian beliefs.

Jaelene Hinkle, who plays for North Carolina Courage, is widely considered to be one of the best female players in the country, having been described as “the finest left-back in the NWSL,” but was not selected for the World Cup squad.

“Many have wondered if the snub had anything to do with the player’s refusal to promote the LGBT lifestyle, reportedly on Christian moral grounds,” reports Sputnik.

Coach Jill Ellis claimed that the decision to leave out Hinkle was ‘solely based on soccer’, but this explanation was greeted with “widespread scepticism,” according to the Washington Times.

Many believe that Hinkle was frozen out because she spoke out against the US Supreme Court’s ruling that legalized same-sex marriage and in 2017 refused to play in a match where the US team wore special rainbow-themed team jerseys for two international friendlies celebrating Gay Pride Month.

My God Is Good. What an incredible day. Yesterday was full of so many emotions, but the greatest one I felt all day was love. Love from my team. Love from my family. And most importantly love from my God. And let me tell you, the feeling was mutual. I’ve never loved a team more. I’ve never been so grateful to my family for traveling to Portland to be with my team and I. And I truly have never felt the covering of my Savior like I did yesterday. Truly a day I will never forget! And thank you #CourageCountry for all the love and support all year long. This moment doesn’t happen without you. So with that, cheers my homies! 2018 was ours, and I wouldn’t have wanted to conquer it with anyone else. ❤️ “This girl ain’t goin anywhere.” – Lauren Daigle #Colossians323 #NoFinishLine

“I’m essentially giving up the one dream little girls dream about their entire life. It was very disappointing. If I never get another national team call-up again then that’s just a part of [God’s] plan, and that’s OK,” said Hinkle.

Following the team’s World Cup win, attention has centered around purple haired captain Megan Rapinoe, who has made a series of anti-Trump statements, refused to sign the national anthem and refused to visit the White House.

She was also involved in an incident where the US flag was dropped on the ground as she celebrated.

Rapinoe has also mentioned the fact that the team contains numerous lesbian players on many occasions.

As we highlighted yesterday, Rapinoe was caught on camera engaging in a narcissistic rant asserting, “I deserve this!” as the balanced the World Cup trophy on her knee.

Megan Rapinoe standing on a parade float in Manhattan with a bottle of Veuve in one hand and the World Cup trophy in the other shouting “I DESERVE THIS.”

There will never be a bigger mood. pic.twitter.com/GjHMjGkgsS

Rapinoe has also been promoted by the media as a mouthpiece to argue for equal pay, despite the Women’s World Cup earning $5,869,000,000.00 less in revenue than the men’s World Cup.

Not to forget that the under-15 Dallas Academy boys team beat the professional U.S. women’s soccer team 5-2, so maybe they should be invited to the White House instead.