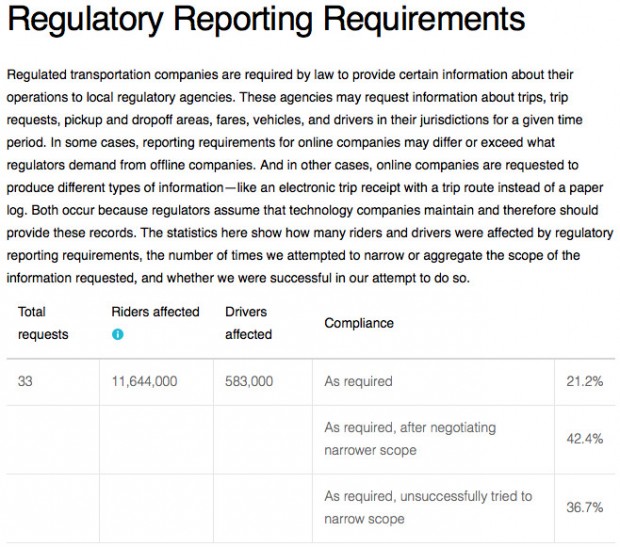 Ride-sharing company Uber admitted Tuesday to giving data on more than 12 million of its users to multiple U.S. government agencies.

According to the company’s first-ever transparency report, both U.S. law enforcement and regulators were provided with information on millions of users between July and December 2015 alone.

“Like other companies, we receive requests from law enforcement agencies for information about our riders and drivers during the course of a criminal investigation or other emergency,” the report states.

Requests from law enforcement agencies at both the state and federal level included information on everything from pickup and drop-off locations to the identity of specific drivers and passengers.

“These agencies may request information about trips, trip requests, pickup and dropoff areas, fares, vehicles, and drivers in their jurisdictions for a given time period,” the company said.

The company expressed specific concern not over law enforcement, but over the amount and scope of requests by regulators.

“Of course regulators will always need some amount of data to be effective, just like law enforcement. But in many cases they send blanket requests without explaining why the information is needed, or how it will be used,” Uber wrote. “And while this kind of trip data doesn’t include personal information, it can reveal patterns of behavior—and is more than regulators need to do their jobs.”

“It’s why Uber frequently tries to narrow the scope of these demands, though our efforts are typically rebuffed.”