Commentary in the wake of Monday’s bombing jihad in Manchester is being carefully patrolled, and politically incorrect ‘voices of dissent’ are being crushed as the UK thought police seek to disguise the root causes of successive terrorist attacks on UK soil.

Prominent journalist and talk show host Katie Hopkins has been forced to leave Leading Britain’s Conversation (LBC) radio after comments and tweets she made this week were reported to Metropolitan Police, who launched an investigation into the matter.

The news of Hopkins’ departure from LBC comes just days after it was discovered that authorities were actively investigating the Daily Mail columnist for her ‘inflammatory’ tweets.

Hopkins first tweeted, then deleted, about the need for a “final solution” to the slew of jihadist attacks in the UK, later posting a less implicated call for action from “Western men.”

Hopkins clarified her meaning of “final solution” in an interview with Tucker Carlson, saying, “What I meant was, we need a lasting solution – a resolution to this.”

Both tweets were forwarded to the Met Contact Center by an authoritarian leftist who threatened Hopkins with “a spell behind bars.” 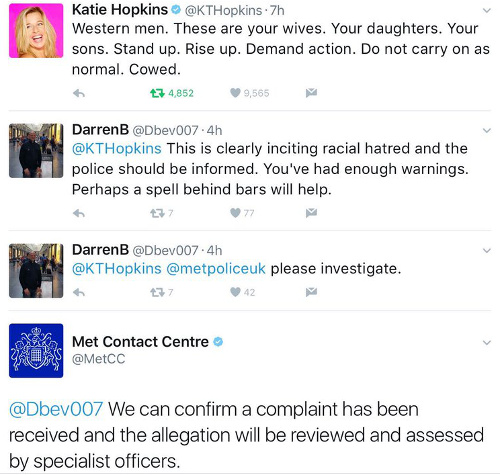 “Police have already opened one investigating into Mail Online columnist Katie Hopkins after she said Western men need to ‘demand action’ in response to the terrorist nail bomb attack which targeted children leaving an Ariana Grande concert,” reported Infowars’ Kit Daniels. “It’s mindblowing that London police will spend manpower censoring free speech on Twitter while children are being targeted in terrorist attacks, but this isn’t accidental.”

“By preventing people from speaking out against the government policies that fuel terrorism, the establishment can condition the public into believing they are helpless in stopping the flood of military-age migrants into the country.”

Mainstream media is also doing its part to obstruct the public from engaging in an open dialogue about terrorism in the West, as outlets like the Daily Express are closing the comments sections on their articles on the bombing – a common tactic by the MSM when they seek to obfuscate information that commenters are likely to share with each other that could cast a shadow of doubt on the original content.

“With trust in mainstream media plummeting, the real goal behind the censorship and in some cases entire removal of comment sections is to manipulate public opinion,” writes Paul Joseph Watson on the matter. “The credibility of the article in question is largely dependent on the tone of the comments left in response. The more negative, uncivil and ‘toxic’ the tone, the less likely the reader is to trust the article and the publication.”

Watson’s article cited a study in the Journal of Computer-Mediated Communications which found that, “People reacted neutrally when comments were disabled, but even when comments were generally positive their reactions did not noticeably improve. However, when the reader feedback took on a ‘less civil’ tone with people questioning the merits of nanotechnology, user perception of the publication itself (not just the topic discussed) took a decidedly negative turn.”

The concept of ‘political correctness’ – essentially developed by mass murdering Chinese dictator Mao Zedong – empowers leftists and statists to silence those with whom they disagree by attacking their positions – or even their character – as ‘racist,’ ‘bigoted,’ ‘Islamophobic,’ etc.

The truth about political correctness is that it is a technique designed to mold public opinion to match that of the government’s – and purge those which do not.