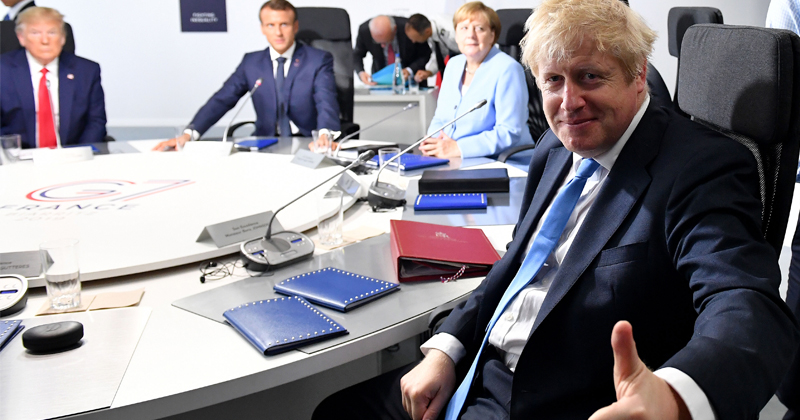 Though by now Washington appears no closer to military strikes on Iran than it was before the Sept. 14 Saudi Aramco attack, a joint statement by Britain, France, and Germany has brought the kind of international allied consensus the US administration is looking for.

The three European countries announced it was “clear” Iran was responsible for the twin aerial strikes on the facilities, however, stopped short of calling for any military retaliation, instead urged Iran to reengage negotiations on its nuclear and missile programs.

The statement does warn of “risk of a major conflict” and underscores making “collective efforts towards regional stability and security” which includes bringing the Yemen war to an end.

“The time has come for Iran to accept a long term negotiation framework for its nuclear program, as well as regional security issues, which include its missile programs,” the three governments said.

Iran has in the past said its missile programs complied with international norms and remains a non-starter in any negotiations with the US or its allies.

Joel Skousen joins The Alex Jones Show to break down the US Intelligence agenda of keeping the war machine moving around the globe to feed the military industrial complex.

Interestingly, the statement condemns Iran for the attack but also admits the investigation is ongoing. According to the statement:

We condemn in the strongest terms the attacks on oil facilities on Saudi territory on September 14th, 2019 in Abqaiq and Khurais, and reaffirm in this context our full solidarity with the Kingdom of Saudi Arabia and its population.

It is clear to us that Iran bears responsibility for this attack. There is no other plausible explanation. We support ongoing investigations to establish further details.

Citing no evidence, the statement surprisingly appeals to there supposedly being “no other plausible explanation” — despite many possibilities being documented by analysts and international publications.

The joint statement was issued upon French President Emmanuel Macron, British Prime Minister Boris Johnson and German Chancellor Angela Merkel meeting during the annual United Nations assembly of world leaders this week, where they discussed the Iran nuclear deal and ratcheting tensions in a trilateral dialogue.

The UK’s Johnson has urged Iran to back a new “Trump deal” after Washington backed out of the 2015 nuclear deal in May 2018. “If it was a bad deal — and I’m willing to accept that, it had many, many defects — then let’s do a better deal,” the prime minister told NBC News.

This marks a sharp change in Britain’s rhetoric on the JCPOA, which up until Johnson’s interview had been to follow the rest of Europe in seeking to uphold its terms.