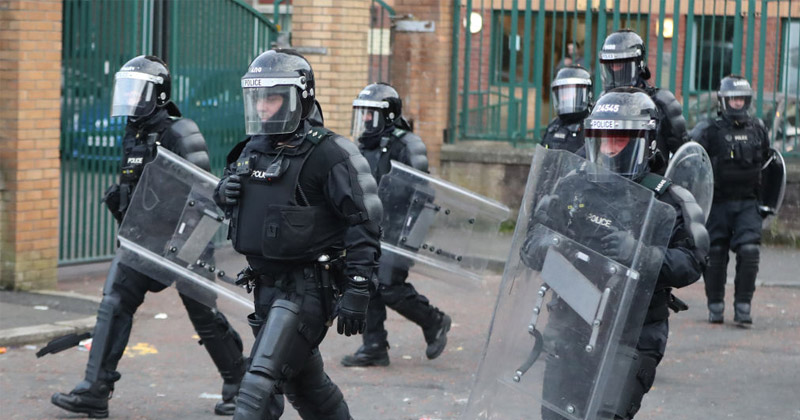 As Britain imposes local lockdowns, a newly released study suggests the UK is a hair’s breadth away from devastating riots. However, the government was warned about this a long time ago, and apparently chose to proceed anyway.

When the British government’s policing and security advisers met in London on July 2, their tone was serious. Racial and societal tensions, they warned, had reached boiling point in the UK, and the re-imposition of coronavirus lockdown measures could ignite this powder keg and trigger riots unseen since the mass unrest of 2011.

If this happens, the advisers warned, police would be unable to contain the chaos, and “military support” would be required to restore order.

The advisers’ concerns were laid out in a paper, published on Friday by the government’s Scientific Advisory Group for Emergencies (Sage). However, in the month between the meeting and the publication, the government seems to have disregarded some of its key recommendations.

Localized lockdowns have been reimposed, with Health Secretary Matt Hancock announcing on Thursday that people in parts of Greater Manchester, West Yorkshire and Leicester would not be able to meet each other indoors. Residents of Leicester have already labored under severe restrictions for several weeks, and nationally, Prime Minister Boris Johnson on Friday extended the shuttering of “close-contact services” – such as casinos and bowling alleys – for another two weeks.

This is exactly what the paper warned against. Local lockdown “carries with it a series of threats to social cohesion and public order,” its authors cautioned.

According to the study, lockdowns, and the policing needed to enforce them, increase the anger of Britain’s black and minority population, who feel disproportionately targeted by law enforcement. This pronouncement puts the government between a rock and a hard place. Allowing mass gatherings of black youths – like illegal block parties and raves – raises the likelihood of a coronavirus resurgence; breaking them up with riot police only raises already bubbling racial tensions.

Compounding the problem, the report warns that “much larger sections of the population” sympathise with the right wing and disagree with the Black Lives Matter movement’s destruction of statues and monuments in London and Bristol. These Britons are unlikely to accept de-facto house arrest on account of the coronavirus, after police in London allowed thousands of BLM protesters to march through the city’s streets in June.

A glimpse of this anger was seen a month ago, when the government threatened to close beaches due to “irresponsible” gatherings of mostly white sun-seekers, days after the London protests. The government’s choice of priorities, one political commentator wrote at the time, was “utterly wrong-headed.”

Moscow was also blamed for the bubbling resentment. “Hostile foreign media – most obviously RT – are apt to provide live coverage of sensitive events (e.g protests) and to amplify grievances of any disaffected group,” the paper outlined. To the advisers, reporting on Britain’s decaying social cohesion is evidently considered a “hostile” act. However, in an era where Russia is a reliable scapegoat for the UK’s own ills – with accusations ranging from meddling in Brexit to stealing vaccine research – RT’s inclusion is perhaps par for the course.

Three weeks after the report’s release, it’s evident that Johnson’s government did not take heed of its recommendations. For instance, the paper recommends an “effective communication strategy” with regard to policing. The areas of northern England now under lockdown have not received effective communication, with Hancock’s announcement this week coming out of the blue on Thursday night. Furthermore, the regulations are riddled with contradictions – holidays are permitted while local gatherings are not – and, while the government has threatened rulebreakers with fines of £100, no law actually exists to enforce this penalty.

Police were advised to be “seen to be impartial,” yet that has not happened. The black youths whose raves were raided see the police as a racist force. The white masses threatened with fines for attending beaches see the law as favoring BLM protests.

Johnson was heavily criticized for his government’s reluctance to impose lockdown measures at the outset of the pandemic, even as the UK’s European neighbors forced their citizens to remain at home under the threat of fines. He was then criticized in June for lifting these measures too early, with his own advisers declaring that the disease was spreading “too fast” to relax the lockdown.

Now, the Sage paper is quite clear in opposing local lockdowns, warning that the resulting public disorder would trigger a surge in cases that could be “next to impossible to contain.” This pronouncement, if true, leaves Johnson’s government facing an unenviable dilemma: crack down on the virus and unleash once-in-a-generation riots, or back off and allow nature to run its course, for better or worse. Ironically, the latter choice was initially mulled by Johnson, who suggested in March that Britain could possibly take Covid-19 “on the chin.”

A solution probably lies somewhere in between, and the report recognises this. Police are encouraged to modify their approach depending on the nature of gatherings and assemblies; the government is advised to acknowledge “community tensions” when implementing public health measures; and if localised lockdowns are to be implemented, they shouldn’t be without solid intelligence.

Another powerful BANNED.VIDEO montage of America’s Frontline Doctors speaking out against Big Tech censorship and the massive Coronavirus cover up.