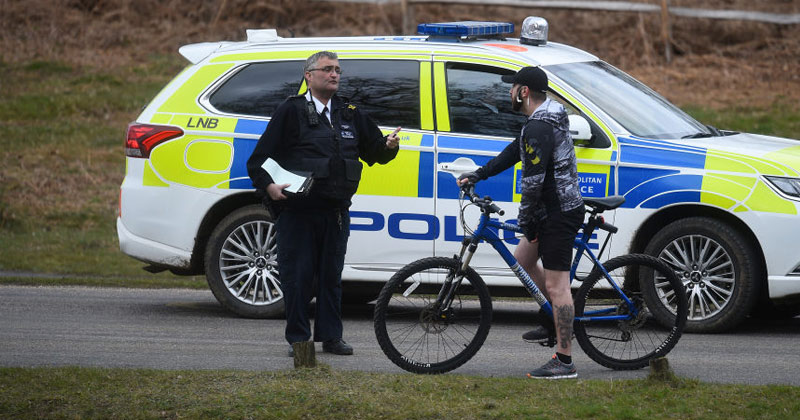 After clamoring for stricter measures, some in the UK have started complaining about a “police state.”

Transport minister Grant Shapps admitted some officers had been “heavy-handed” but insisted most have been doing a “good job.

The mood of most Britons seems to be shifting, just one week after Boris Johnson announced a coronavirus lockdown.

Following a raft of calls for more draconian measures, and criticism of the government for not imposing stricter controls, the country now appears tobe concerned about a loss of civil liberties and about the hugely-damaging economic fallout.

Police have widely been slammed for being ‘over-zealous’ in enforcing the new rules, brought in to slow the spread of Covid-19.

Stories of cops using drones to shame walkers in rural areas, dyeing a lake black to put people off going swimming, even officers instructing shops to stop stocking Easter eggs, have all faced a backlash.

#PoliceState started trending on Twitter in the UK as users blasted security forces for going too far.

Secretary of State for Transport Shapps said there had been “one or two instances” of police being heavy-handed with enforcement measures on social distancing.

He told Sky News: “I am sure there are individual examples where perhaps you look at it and think that is perhaps a bit further than they should have gone but in general terms I think the case is that, if people help everybody out, including the police, by staying home and the rest of it, then there will be no problems.”

Shapps also warned that the UK had to be careful to ensure that the “cure” wasn’t more harmful than the pandemic itself.

He said: “One of the things we need to be careful not to do is completely crash our economy to the point where it is impossible or very difficult to pick up again afterwards.

“Otherwise, we will be in a position where we can’t re-start the economy and millions of people will be forced into a poverty situation that would do more harm than the virus itself. That’s really the balance.”

He told the BBC: “The tradition of policing in this country is that policemen are citizens in uniform, they are not members of a disciplined hierarchy operating just at the government’s command.

“This is what a police state is like. It’s a state in which the government canissue orders or express preferences with no legal authority and the police will enforce ministers’ wishes.”

However, despite the criticism, the UK’s chief scientific adviser revealed that the social distancing measures were starting to work.

At a Downing Street press conference, Patrick Vallance expressed cautious optimism that the “dramatic” reductions in travel and contact were making a difference.

He said: “The measures are in place. They are making a difference, they are decreasing thecontact which is so important to spread the disease, and we’re doing a good job at cutting that down.”