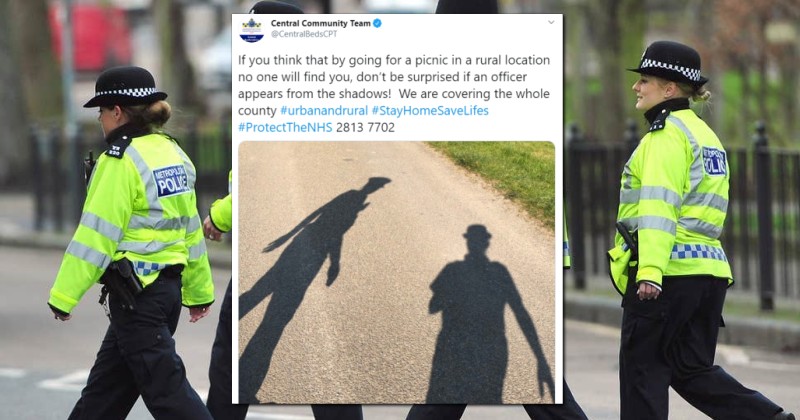 A police force in the UK has bragged that its officers may be ‘hiding in the shadows’ ready to catch people who have picnics in rural locations.

The Central Community Team, which represents Bedfordshire Police, tweeted out an ominous message that sounds like it could have been ripped straight from the pages of George Orwell’s 1984.

“If you think that by going for a picnic in a rural location no one will find you, don’t be surprised if an officer appears from the shadows! We are covering the whole county,” states the tweet.

If you think that by going for a picnic in a rural location no one will find you, don’t be surprised if an officer appears from the shadows! We are covering the whole county #urbanandrural #StayHomeSaveLifes #ProtectTheNHS 2813 7702 pic.twitter.com/hieQ86dM9R

The message was accompanied by a photo of two officers literally standing in the shadows.

“If you think that by going to burgle in a rural location no one will find you, don’t be surprised if an officer appears from the shadows! We are covering the whole county – SAID NO POLICE FORCE EVER,” tweeted one.

“Stop it. Just stop it. If you could compose a Tweet more likely to make me want to go for an isolated picnic, I can’t think of it,” said Philip Sinclair.

The Central Community Team later partially walked back the original tweet, stating, “We’re aware of some concerns in relation to this tweet. Please rest assured that it was well intentioned,” while claiming they are only trying to “save lives.”

We appreciate the weather is lovely but picnics aren’t essential so we’d encourage you to enjoy the sun from home instead. Please remember we’re all just doing what we can to help save lives in a difficult situation. More info: https://t.co/jjD2tLpJ3J 2/2

This is by no means the first time a UK police force has received flak for its overzealous enforcement of lockdown measures.

Last week, the government was forced to clarify that police officers shouldn’t be checking the contents of grocery baskets after a police force suggested they would be looking for “non-essential” items.

The government also clarified that it is not illegal for people to be outside in their own gardens following the release of a video which showed a female South Yorkshire Police officer telling a family it was against the rules for their children to be playing in their own front garden.

While current polls show support for the lockdown measures in the UK is very high, expect those numbers to slip if police forces continue to act in an unreasonable and predatory manner.

Meanwhile, comedian Andrew Lawrence did an impersonation of a UK lockdown cop that wasn’t far removed from reality.

Important message from the constabulary. pic.twitter.com/pn6o5M21PM