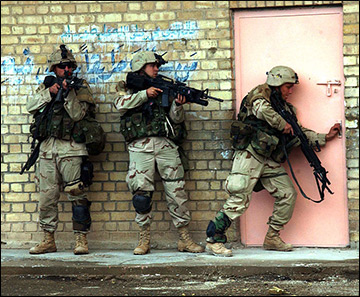 A public inquiry in the UK has heard that British soldiers tortured Iraqi civilians and committed other crimes during operations in southern Iraq in 2004.

Lawyers representing the Iraqi victims and their families at the Al-Sweady Inquiry accused British soldiers of “inhumane and degrading treatment of wounded and broken young men.” However, the UK Ministry of Defense (MoD) said the accusations were “products of lies.”

Bitter claims and counter claims were exchanged on the final day of the year-long hearing looking into conduct of British personnel at the Battle of Danny Boy in Iraq’s Maysan Province in May 2004.

The inquiry, named after a 19-year-old killed by British troops, was set up in 2009 to examine allegations of mistreatment. It has seen thousands of official documents and heard from over 600 witnesses.

The MoD was forced to authorize the inquiry following a High Court ruling that the ministry seriously breached obligations under the Human Rights Act to investigate the matter while hiding evidence that could lead to the convictions of UK troops linked with the killing and maltreatment.

With a bill of some £20 million, the probe has been an expensive affair for the British government. Sir Thayne Forbes, the inquiry’s chairman is expected to report the result by the end of the year.

UK forces participated in the US-led invasion of Iraq in a blatant violation of international law in 2003 under the pretext that the regime of former Iraqi dictator Saddam Hussein possessed weapons of mass destruction. No such weapons were ever discovered in Iraq.