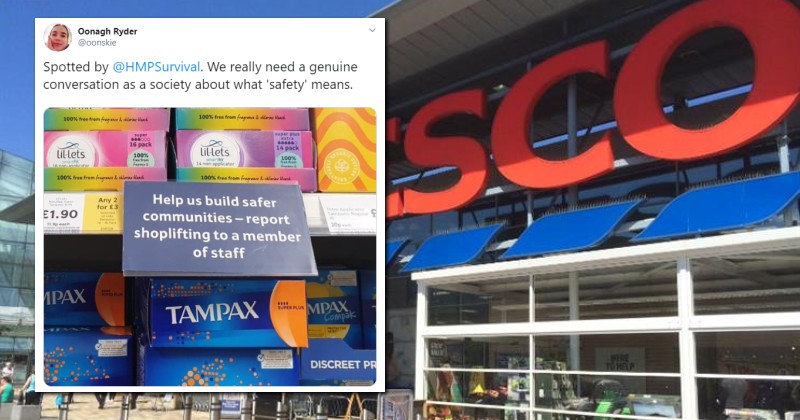 A UK supermarket was forced to apologize for asking people not to steal female menstrual products, because shoplifting is apparently ‘woke’ now.

It all started with a tweet which received nearly 15,000 likes.

“We really need a genuine conversation as a society about what ‘safety’ means,” commented Oonagh Ryder alongside an image of sanitary products on a shelf behind a sign which read “Help us build safer communities – report shoplifting to a member of staff.”

Spotted by @HMPSurvival. We really need a genuine conversation as a society about what 'safety' means. pic.twitter.com/jrH2rx6h3W

Respondents to the tweet asserted their human right to steal tampons and sanitary towels.

“Sanitary products should be free for anybody who menstruates,” said one.

Sanitary products should be free for anybody who menstruates

“Women, trans men, or anyone who menstruates should not have to worry about being reported for taking a necessity that I personally believe should be free,” added another.

Women, trans men, or anyone who menstruates should not have to worry about being reported for taking a necessity that I personally believe should be free

And if you think that’s the end of the absurdity, think again. After BuzzFeed picked up the story, the supermarket in question, Tesco, actually apologized for the sign.

Tesco “removed signs placed above tampons and other menstrual health products that asked people to report shoplifting of these items in its store in Kensington, London” after the signs caused “mass uproar online.”

The company said it was “very sorry for any offense caused” and claimed that the sign was placed “in error.”

“Once, rights were meaningful,” comments the Moonbattery blog. “People insisted on fundamental rights such as free speech and self-defense. But then liberals perverted the word “right,” just as they perverted the word “liberal.” Now we are told that we have a “right” for other people to be forced to provide us with what we want for free. For example, thanks to the predominance of feminism, someone else being made to pay for a woman’s tampons is becoming a right.”

Apparently, it’s now OK to steal things from grocery stores because some ‘woke’ imbeciles on Twitter were offended by something.

Good luck with that, Tesco.