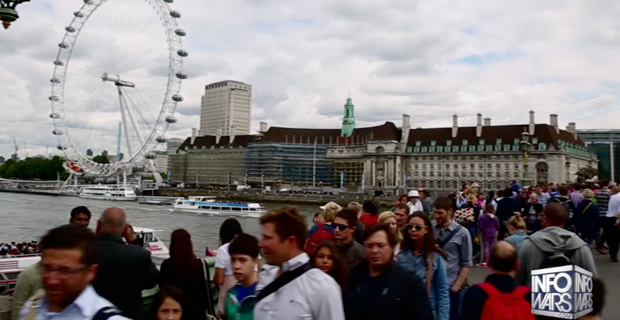 Former EDL leader Tommy Robinson was reportedly re-arrested by police in the UK to prevent him from attending a meeting involving the organizers of a ‘draw Mohammad’ cartoon contest, a shocking illustration of how offending Muslims is being treated as a thought crime.

British police refused to deny the sensational claim, first made by left-wing activist group Hope Not Hate, that Robinson had been, “returned to prison for breach of license (for a conviction for mortgage fraud) in what appeared to be an attempt by the authorities to prevent him from getting in the cartoon plot.”

When contacted by Breitbart London the National Probation Service did not distance itself from the allegation and said in a statement, “Public protection is our priority. Offenders on licence are subject to strict conditions and are liable to be recalled to custody if they breach them.”

Although a separate claim made by the left-wing group, that Robinson and others were planning to start a “civil war” in the UK by distributing Mohammad cartoons in Muslim areas, was subsequently debunked, it is important to emphasize that Robinson himself believes that the police arrested him because they (mistakenly) thought he would be attending a meeting related to the draw Mohammad event.

“I believe they kept me in to prevent me attending a meeting on the 23rd,” tweeted Robinson in response to being asked by someone if the Breitbart article was true.

@MehrdadAmanpour @BreitbartLondon I believe they kept me in to prevent me attending a meeting on the 23rd.

The notion that Robinson, whose views are admittedly controversial (he’s basically the Pamela Geller of the UK), would be snatched by authorities to prevent him from exercising his freedom of assembly and free speech because such actions could lead to Muslims being offended at some point in the future, is an outrage.

Compare Robinson’s treatment to that a man who was seen wandering around Big Ben last month wearing an ISIS flag. The man was briefly spoken to by officers but they did not arrest him or take him in for further questioning.

Robinson would not be the first victim of arrest in the United Kingdom for the sin of offending Muslims.

The quote was taken from a book first published in 1899 in which Churchill writes about Islam, “Improvident habits, slovenly systems of agriculture, sluggish methods of commerce, and insecurity of property exist wherever the followers of the Prophet rule or live.”