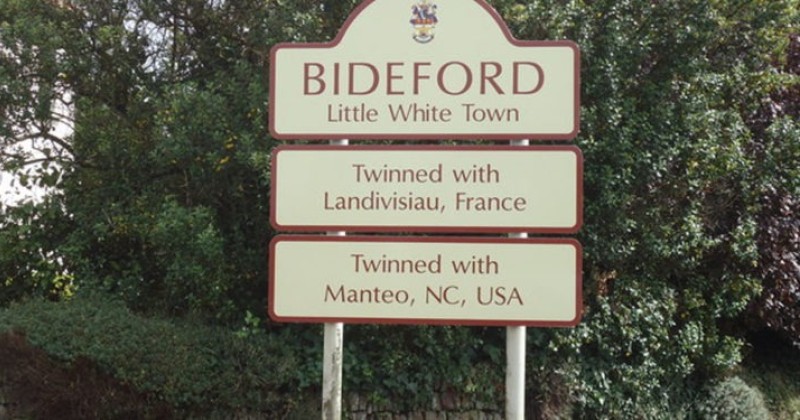 A village in the UK known as ‘The Little White Town’ because of its many whitewashed buildings may be forced to change its tagline over concerns the name is racist.

Bideford, a historic port town in north Devon, south-west England, has a population of just over 17,000 according to the last census.

Signs for the town describe it as ‘Little White Town’, a moniker that has been in existence for the best part of 150 years.

As Jack Hadfield writes, “The phrase was first coined by the author Charles Kingsley, when he wrote about Bideford in his 1855 novel, “Westward Ho!” after seeing the many white properties that dot the local landscape. Many of the houses were ordered to be limewashed to prevent the spread of cholera at the time.”

However, Conservative Party Councillor Dermot McGeough says that there have been complaints from some people and that the name is “racist” and needs to be removed.

“Following a number of complaints from parishioners, I propose that the words “Little White Town” are removed from all signs within the town and at the town entrances,” said McGeough. “The wording “Little White Town” can be perceived as causing a racist slur and not politically correct. Therefore this issue should be rectified immediately. If this wording is not removed, the town council could be classed as a racist white supremacist.”

McGeough told the Telegraph, “It’s the right thing to do because we don’t want people thinking we’re a bunch of white supremacists.”

McGeough is an idiot and should resign immediately. He is an embarrassment to every single resident of Bideford and yet more proof that the so-called ‘Conservative Party’ isn’t conservative at all.

A poll showed that 69% of residents oppose changing the name while 31% support the measure.

A local man blamed the controversy on “the influx of people coming who think it’s racist,” adding, “All the people I associate with think it’s complete madness.”

Resident Liz Wilde called the proposal “absolutely bonkers,” commenting, “It’s part of our history. It’s because the houses were painted white because of the cholera risk, and I think it is really important to preserve that sort of thing.”

This kind of story is why the UK is the undisputed capital of Clown World Order.