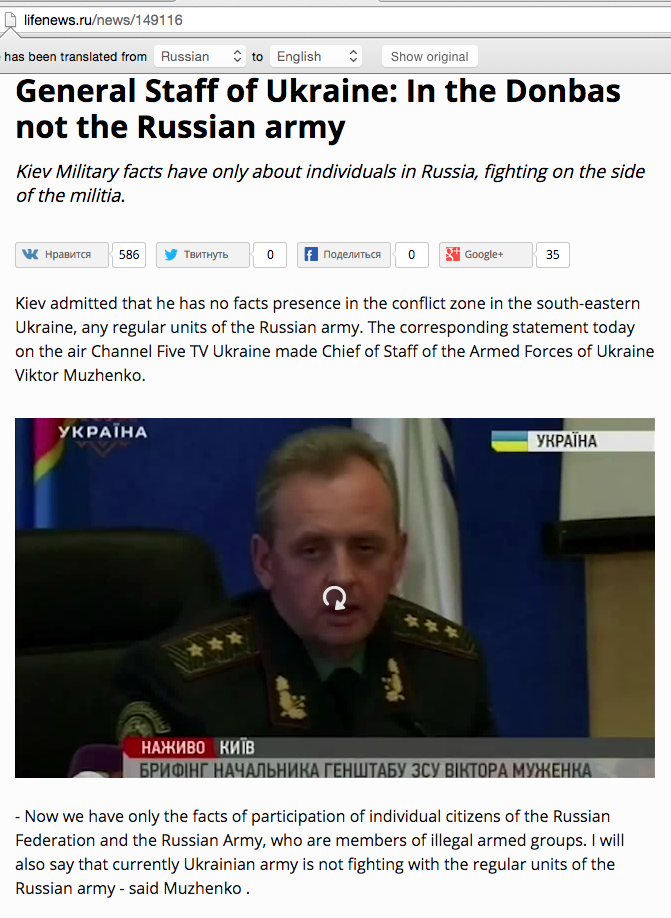 Here is a screen-print of a google-chrome auto-translation of that statement:

The Chief of Staff of Ukraine’s Armed Forces, General Viktor Muzhenko, is saying, in that news-report, which is dated on Thursday January 29th, that the only Russian citizens who are fighting in the contested region, are residents in that region, or of Ukraine, and also some Russian citizens (and this does not deny that perhaps some of other countries’ citizens are fighting there, inasmuch as American mercenaries have already been noted to have been participating on the Ukrainian Government’s side), who “are members of illegal armed groups,” meaning fighters who are not paid by any government, but instead are just “individual citizens” (as opposed to foreign-government-paid ones). General Muzhenko also says, emphatically, that the “Ukrainian army is not fighting with the regular units of the Russian army.”

The allegation to the effect that Ukraine is instead fighting against “regular units of the Russian army” is the allegation that Vladimir Putin’s Russia has invaded Ukraine, and it is the entire basis for the economic sanctions that are in force against Russia.

Those sanctions should therefore be immediately removed, with apology, and with compensation being paid to all individuals who have been suffering them; and it is therefore incumbent upon the Russian Government to pursue, through all legally available channels, restitution, plus damages, against the perpetrators of that dangerous fraud — and the news reports have already made clear precisely whom those persons are, who have asserted, as public officials, what can only be considered to be major libel.

Otherwise, Ukraine’s top general should be fired, for asserting what he has just asserted.

If what General Muzhenko says is true, then he is a hero for having risked his entire career by having gone public with this courageous statement. And, if what he says is false, then he has no place heading Ukraine’s military.

Investigative historian Eric Zuesse is the author, most recently, of  They’re Not Even Close: The Democratic vs. Republican Economic Records, 1910-2010,  and of CHRIST’S VENTRILOQUISTS: The Event that Created Christianity.