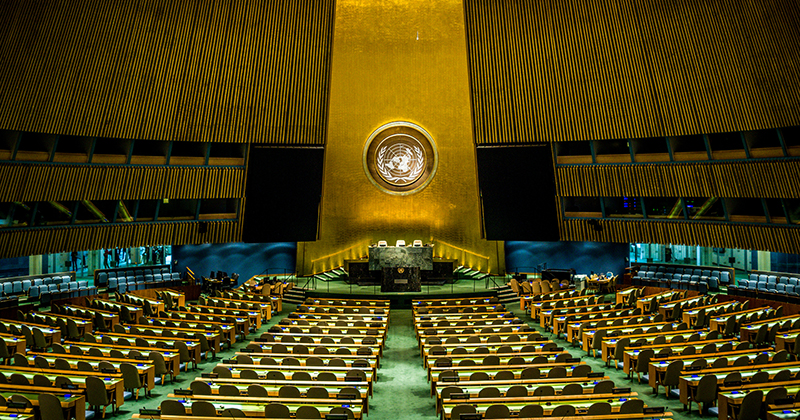 President Trump wants to label Antifa a terrorist organization, which he first announced late last month in response to mayhem unleashed related to the George Floyd protests, which in many cities included rioting, looting, and large-scale vandalism.

He had declared so via Twitter on May 31 in follow-up to Attorney General William Barr’s statement at the time:  “The violence instigated and carried out by antifa and other similar groups in connection with the rioting is domestic terrorism and will be treated accordingly.”

Infowars was on scene when a group of young men drove their vehicle into a fenced off basketball court and went for a joyride in CHOP.

To the surprise of many, the United Nations has now issued a statement rebuking the White House attempt to impose the legal designation. Upon a UN statement being issued on Friday, counter-terrorism expert Max Abrahms at first thought it was a joke, but no it’s not The Onion.

The UN Geneva office cited unnamed experts associated with its Human Rights Council to express “profound concern over a recent statement by the US Attorney-General describing [Antifa] and other anti-fascist activists as domestic terrorists, saying it undermines the rights to freedom of expression and of peaceful assembly in the country.

This even after there’s been widespread uncertainty and debate over just who or what the group actually is. Or Antifa might more appropriately be seen as a loosely defined movement espousing radical Leftist ideology. But the new UN statement appears positively supportive given it clearly asserted that Antifa is composed of mere “anti-fascist activists”.

Anon Thread-
Why is #antifa waving a #UN flag? pic.twitter.com/19pdOMbvuK

The unusual UN tweet and statement was widely mocked via conservative social media, for example with OAN journalist Jack Posobiec tweeting: “The United Nations is running cover for an international extremist group that has conducted violent insurrectionist attacks across North America and Europe.”

United Nations comes out in support of Antifa. Of course they support it. It's just a precursor to UN peacekeepers on American soil to serve as international police. https://t.co/hs5SzKlESQ

And a number of others called for “defunding the UN”.

But more importantly, Secretary of State Mike Pompeo took the UN Human Rights Council to task, slamming the body’s ‘hypocrisy’ in lecturing Washington on race issues while being “a haven for dictators and democracies that indulge them.”

The @UN_HRC debate on policing and race in the U.S. marks a new low for that body. Our vigorous, ongoing civic discourse is a sign of our democracy’s strength and maturity. We were right to leave this joke of a “human rights” forum comprised of Venezuela & recently, Cuba & China.

Meanwhile, speaking of unusual and perhaps bizarre statements, one sheriff’s office in Louisiana issued this video “warning” to Antifa, which has also gone viral:

This message from Louisiana law enforcement officers to ANTIFA is the best thing you will hear today.pic.twitter.com/ywRN7Z4Q9j