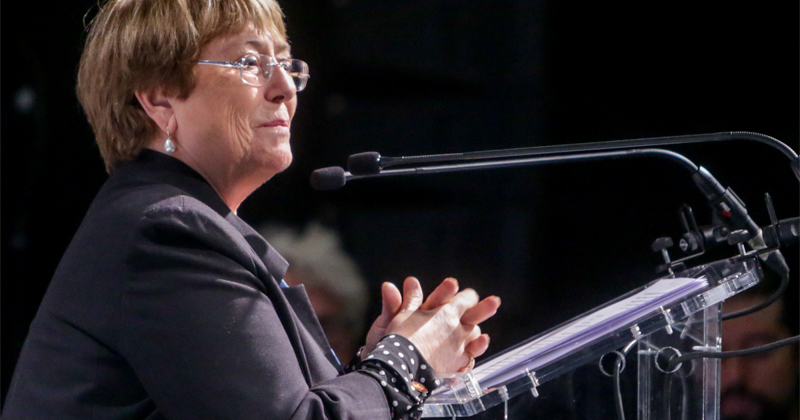 On Wednesday, radical leftist Bachelet issued a statement in response to the in-custody killing of suspected fraudster George Floyd.

Since the killing of George Floyd at the hands of police in Minneapolis last month, a wave of massive protests has surged forward – not only across every state in the United States, but also in dozens of countries in Europe and all around the world.

That act of gratuitous brutality has come to symbolize the systemic racism that harms millions of people of African descent – causing pervasive, daily, life-long, generational and too often, lethal harm.

It has become emblematic of the excessive use of disproportionate force by law enforcement – against people of African descent, against people of color, and against indigenous peoples, and racial and ethnic minorities, in many countries across the globe.

It has brought to a head the outrage of people who feel they are neither adequately served, nor adequately heard, by their governments.

It has brought to their feet millions of allies – people who are now beginning to acknowledge the reality of systemic discrimination suffered by others, and to join their demand that every person in their countries be treated with equality, fairness and respect.

Bachelet goes onto address her African colleagues and the recent George Floyd protests and riots to feel reverberations on a global level.

Now we need decisive action across the world – not only to reform or re-imagine specific institutions and law enforcement agencies, important though that is, but to address the pervasive racism that corrodes institutions of government, entrenches inequality and underlies so many violations of human rights. And the cycles of impunity which have permitted this to happen must end.

From poor health-care to inadequate education, limited job advancement, refusals of housing and mortgage loans, ill-treatment by officials, practical restrictions on the right to vote and over-incarceration in prisons, racial discrimination produces overwhelming harm to millions of people.

I have been heartened to see some first measures now being taken by national and local authorities to implement reforms of practices related to policing that are long overdue. They include banning of chokeholds by police; rulings that prohibit the use of tear gas, rubber bullets and flash grenades against peaceful protestors; limitations on provision of military-grade weaponry to police forces; and – perhaps most vital of all – measures to better ensure both prompt and effective accountability and prosecution for misconduct by security forces.

The ex-President took to Twitter to echo similar sentiments in a Tweet. She wrote: “We should go beyond existing recommendations. Time is of the essence. Patience has run out. Black lives matter. Indigenous lives matter. The lives of people of colour matter. All human beings are born equal in dignity and rights. #StandUp4HumanRights. That is what we stand for.”

We should go beyond existing recommendations. Time is of the essence. Patience has run out.

All human beings are born equal in dignity and rights. #StandUp4HumanRights. That is what we stand for.


Bachelet’s late first term as Chilean president was embroiled in scandal over her government’s response in dealing with the lethal 2010 8.8 earthquake. Her second term was marred by fraud claims involving one of her sons.

The former president spent around four years exiled in socialist East Germany following her activities in the Chilean Socialist Youth before the 1973 coup d’état.