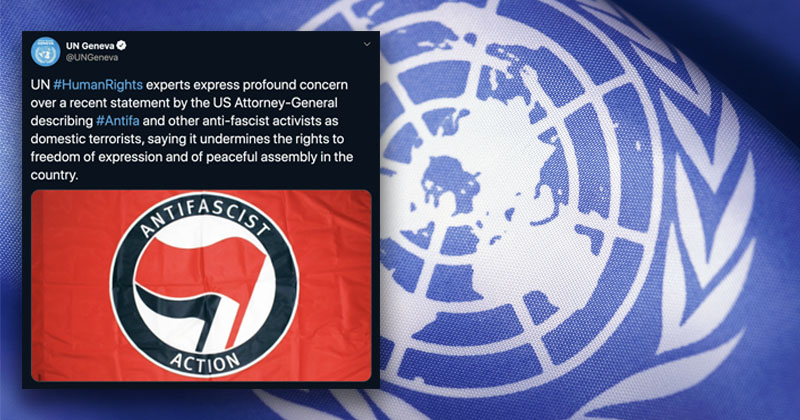 Update: The United Nations has removed its tweet supporting Antifa after 24 hours.

The United Nations came to the defense of Antifa, slamming President Trump for labeling the violent far-left group as a terrorist organization because it violates its “right to peaceful assembly.”

The United Nations Office at Geneva, Switzerland (UNOG) posted Antifa’s flag on its official Twitter account Friday, claiming that a group of “human rights experts” condemned the Trump administration’s decision to classify Antifa as a terrorist group because that violates their First Amendment rights.

“UN #HumanRights experts express profound concern over a recent statement by the US Attorney-General describing #Antifa and other anti-fascist activists as domestic terrorists, saying it undermines the rights to freedom of expression and of peaceful assembly in the country,” the globalist body tweeted.

UN #HumanRights experts express profound concern over a recent statement by the US Attorney-General describing #Antifa and other anti-fascist activists as domestic terrorists, saying it undermines the rights to freedom of expression and of peaceful assembly in the country. pic.twitter.com/2Pz2dMyq8k

The UN’s support for Antifa comes specifically in response to Attorney General William Barr’s statement made following the nationwide Black Lives Matter riots and looting in blue cities, saying the violence was “instigated and carried out by Antifa and other similar groups in connection with the rioting is domestic terrorism and will be treated accordingly.”

“Federal law enforcement actions will be directed at apprehending and charging the violent radical agitators who have hijacked peaceful protest and are engaged in violations of federal law,” Barr added.

Trump declared Antifa a terrorist organization around the same time.

Indeed, one would be hard-pressed to find instances of Antifa demonstrations that did not end in violence.

In fact, the group has openly committed acts of domestic terrorism, contrary to the UN’s gaslighting talking point that they have a right to “peaceful assembly.”

For example, an Antifa member firebombed an Immigration and Customs Enforcement facility in Washington last year.

The violent group also routinely attacks and beats journalists, such as Andy Ngo in 2019.

A top Antifa leader from the so-called CHOP in Seattle even openly threatened “white America” with more “burning” and “looting” if the group’s far-left demands were not met.

But given the UN and media’s ringing endorsement of the violent Marxist group, it’s no surprise some members of Antifa have begun flying UN flags at the Capitol Hill Occupied Protest.

After all, they both want to see the downfall of America.