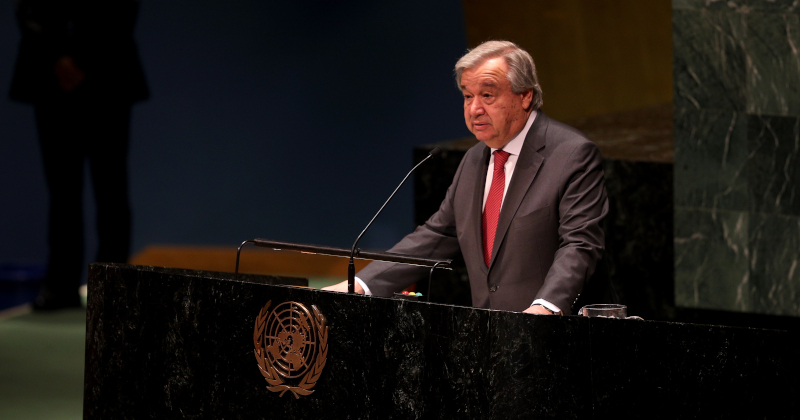 United Nations Secretary-General Antonio Guterres says the U.N. is going to flood the internet and social media with facts and science to counter what he says is a “dangerous epidemic of misinformation” about the coronavirus pandemic.

Guterres said the huge amount of falsehoods surrounding the illness is a “misinfo-demic,” full of bad health advice, lies, wild conspiracy theories and “snake oil solutions.” He says all of this is a “poison that is putting lives at risk.”

He also spoke out against those who are “stigmatizing and vilifying people and groups” because of the pandemic, and he thanking “journalists and others fact-checking the mountain of misleading stories and social media posts.”

“Together, let’s reject the lies and nonsense out there,” Guterres said. “With common cause for common sense and facts, we can defeat COVID-19 — and build a healthier, more equitable, just and resilient world,” Guterres said.

The top U.S. infectious disease expert, Dr. Anthony Fauci, told the Associated Press that when it comes to reopening the economy, the country “is not there yet.”

In the interview, Fauci said the nation still lacks what he describes as the critical testing for suspected cases and ability to track down everyone who came in contact with an infected patient.

“We have to have something in place that is efficient and that we can rely on. … I’ll guarantee you, once you start pulling back there will be infections. It’s how you deal with the infections that’s going count,” Fauci said.

President Donald Trump is eager to reopen shuttered stores and businesses and get locked-down people back to their jobs.

He originally envisioned this week to restart the economy. He now says he would like to get things rolling again by May 1. Fauci calls that target “a bit overly optimistic” at least for many parts of the country. He told the AP that once the outbreak peaks, he “would not be surprised” to see a second wave in the fall. But he said that is not inevitable.

A new report from the U.S. government’s Centers for Disease Control and Prevention says as many as 20% of coronavirus patients are doctors, nurses, and other health care providers.

It says Italy and Spain are among the countries reporting similar numbers.

The CDC reports 27 medical professionals have died from COVID-19.

Meanwhile, the World Health Organization says more than 60 coronavirus vaccines are in development around the world.

It says research groups, who normally prefer to work independently, are teaming up with others to help speed up the processes.

The U.S National Institutes of Health has teamed up with the health science firm Moderna to also develop a vaccine. The first test subject received a second dose Tuesday.

Fauci of the NIH told the Associated Press that there are no “red flags” so far in the testing and that it may be expanded to more subjects in June.

Fauci had predicted that a COVID-19 vaccine could be ready within 18 months. But says it is possible that it could happen sooner.

“Please let me say this caveat: That is assuming that it’s effective. See, that’s the big ‘if,’” Fauci stressed. “It’s got to be effective and it’s got to be safe.”

If it’s a hot summer in New York City this year, it may be hard to find a place to cool off.

De Blasio did not directly comment on the report Tuesday but said “we’re going to take this very slow and carefully to make sure we get it right. I’m always going to first focus on how do we guarantee the health and safety of New Yorkers and make sure we don’t take our foot off the gas too soon.”

The Czech government says it will slowly begin to reopen stores starting next Monday, but all Czechs will still be required to wear face coverings.

Austria allowed thousands of shops to reopen Tuesday, but India has extended its nationwide lockdown through May 3.