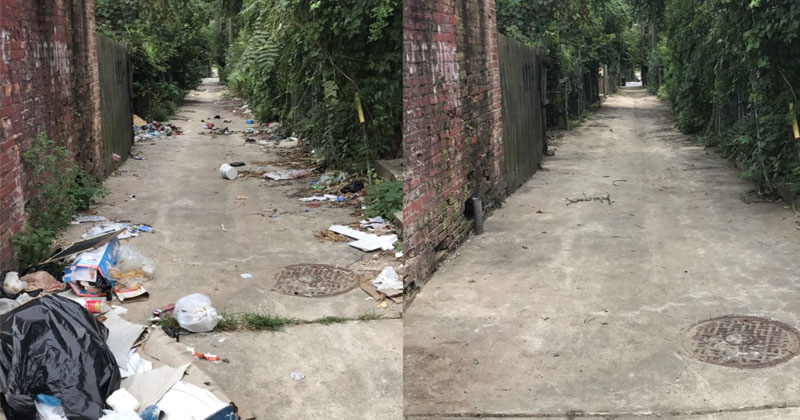 Dozens of conservative volunteers gathered in a West Baltimore neighborhood to clean up garbage and filth after President Trump drew national attention to the city’s horrible conditions last week.

“We can’t do it alone,” 58-year-old Baltimore resident Millie Jefferson told the Baltimore Sun. “It makes me feel good to see that there are still some good people and good communities that want to see better.”

We're here in West Baltimore to pick up trash.

This isn't a Trump rally, nor an anti-Representative Cummings event.

Some of the trash and filth had been building up for so long, Presler reported finding old newspapers in the street from 1999.

In addition to picking up garbage and litter, the volunteers also weed-whacked, mowed grass, and “beautified” the area.

“I’m thankful that [Trump] brought attention to Baltimore,” said Presler. “It’s important to know that although we are the best, freest, greatest country in the world, we still have our problems, and we can’t look at the world just through rose-colored glasses.”

What an outpouring of love in West Baltimore! #AmericansHelpingAmericans #MondayMotivation pic.twitter.com/klC0RQpqFb

“This is not a Trump rally, this is not anti-Representative Cummings at all, this is just simply Americans Helping Americans,” he added. “And that’s it.”

Some locals were thankful to see the community come together to tackle the problem, especially in spite of the media-induced hyper-partisan political environment.

Of course, the left predictably criticized the cleanup effort as racist, but failed to sow division.

While many volunteers were locals, some flew in from out of state to join the clean-up effort, and thanked Trump for bringing attention to the inner-city issues.

“I do salute President Trump for bringing it to the forefront and I hope we can find a place in the middle where we all sit down,” said Frederic Norman, a minister from Atlanta, Georgia. “How can we talk to each other instead of at each other? Because the problem remains.”

While the cities crumbling from Democratic rule collapse, and pedophile rings are exposed as high-ranking Democrat politicians and donors, the people are waking up from the lies.