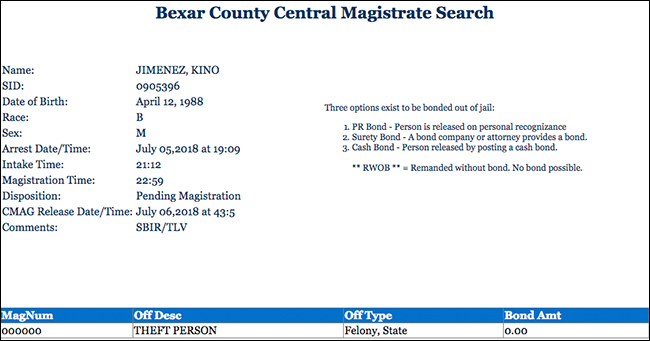 The man caught on video pouring a drink on a teen and then stealing his Make America Great Again hat was arrested Thursday.

“This evening detectives assigned to the Robbery Task Force were able to locate the suspect in the ‘Whataburger’ incident,” San Antonio police indicated Thursday night. “Warrant #1653732 was issued for the suspect Kino Jimenez 30 years (Sid# 905396). The aforementioned warrant is for Theft of Person. Kino Jimenez was located in Universal City, Texas. Universal City police officers took Mr Jimenez into custody without incident.”

Bexar County jail records show Jimenez was charged with a state felony, and that a bond amount has not been set.

Thug #KinoJimenez has been charged with a felony. 😆 It's a felony because he technically committed theft with violence. Take notes liberals. And good luck having a career, scumbag. https://t.co/xB8w80KwmX

Jimenez was filmed Wednesday throwing a beverage on Richard as the teen dined with friends at a Whataburger restaurant. He then proceeded to take the teen’s pro-Trump hat, saying, “You ain’t supportin’ s–t, n—-.”

So went out for a 2am snack and my friend (wearing a MAGA hat) had his hat stolen and a drink thrown in his face (and mine, you can see my arms on the left of the video) pic.twitter.com/B3QjBFIxPk

“This is gonna go right in my f**king fireplace, b*tch,” Jimenez added as he walked away toward the exit.

Jimenez was subsequently fired from his part-time job at the San Antonio bar Rumble, which released a statement on Facebook condemning his actions before deleting their page entirely.

“THIS BAR IS A SAFE SPACE FOR EVERYONE!” Rumble stated in a now-deleted Facebook post. “No matter your race, creed, ethnicity, sexual identity, and political stance, you are welcomed here!”

Richard said he didn’t want to press charges, but just wants to have a conversation with Jimenez to resolve their differences.

An Instagram post from Richard said he had a great Fourth of July despite “libtard” Jimenez snatching his cap.

HAD A BOMB ASS 4th OF JULY! ALTHOUGH MY HAT GOT JACKED BUT ITS ALL GOOD THE LIBTARD THAT TOOK IT CAN HAVE IT #MAGA #AmericaFirst #242 #HuntersHat

In a statement to Infowars, Whataburger Corporate Communications said they were “shocked” to see the video:

“We were shocked to see this video and certainly don’t condone this type of customer behavior in our restaurants. To be clear, no Whataburger employees were involved or witnessed the incident, and we ask that questions be directed to San Antonio PD as we continue supporting their efforts.” – Whataburger Corporate Communications

Meanwhile, the video caught the attention of the President’s son Donald Trump, Jr., who offered to get Richard a new hat signed by the POTUS himself.

If someone can get me this young man’s information I’ll get him a new #maga hat… SIGNED by #potus!!! https://t.co/zHBz4gKpkf