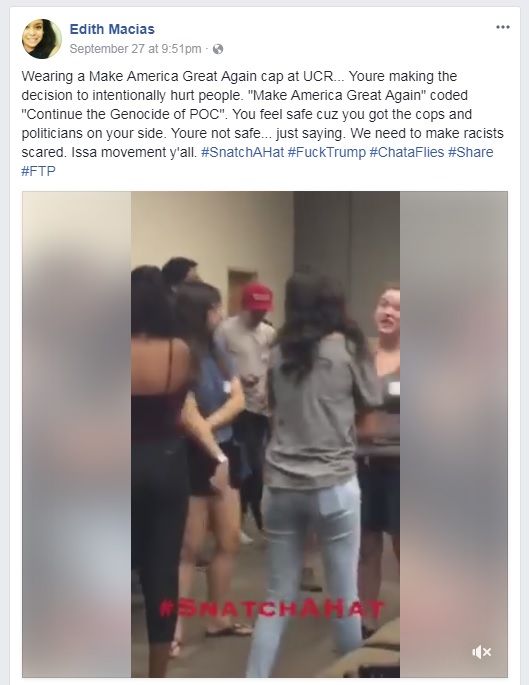 Edith Macias, the UC Riverside student filmed bragging about stealing a fellow student’s “Make America Great Again” hat back in September, is facing up to a year in prison for her crime, The College Fix reports.

From The College Fix:
A criminal complaint provided to The College Fix by the Riverside County District Attorney’s Office states that Edith Macias has been charged with one misdemeanor count of grand theft for the September 27 incident.

The next court date on the matter is slated for March, and the maximum penalty Macias faces if convicted as currently charged is one year in county jail, a spokesman for the DA’s office told The Fix.

The charge was filed after UC Riverside student Matthew Vitale, the student who had his Make America Great Again hat stolen from off his head, decided to press criminal theft charges against Macias.
“I’m very pleased that the DA decided to charge her, especially because I am skeptical that UCR student conduct did anything. I will be following up with the student conduct office to determine if anything was done,” Vitale said Monday in a statement to The College Fix.

“In the meantime, I can’t thank UCPD enough for actually taking this matter seriously. The detective and officers involved with this case were the epitome of professionalism. If, as I suspect, UCR decided not to discipline her in some way this decision by the DA’s office shows two things: First, that UCR does not protect and shows no respect for speech that does not conform to their ideology. Second, that in this case UCR chose not to discipline a person who committed a crime on campus against another student,” he said.

Kudos to Vitale for having the courage to follow through and press charges. You can bet your bottom dollar he’s being subject to vicious harassment from rabid leftists as a result.

Macias herself issued a terroristic threat to her Vitale after the incident, writing on Facebook, “You feel safe cuz you got the cops and politicians on your side. Youre [sic] not safe… just saying. We need to make racists scared.”

That alone should have been grounds for charges and expulsion, but obviously we know in California the rules are not applied equally if one is a member of a “protected class.” That she’s facing charges at all and Vitale is not facing expulsion for trying to right a wrong is remarkable in itself.