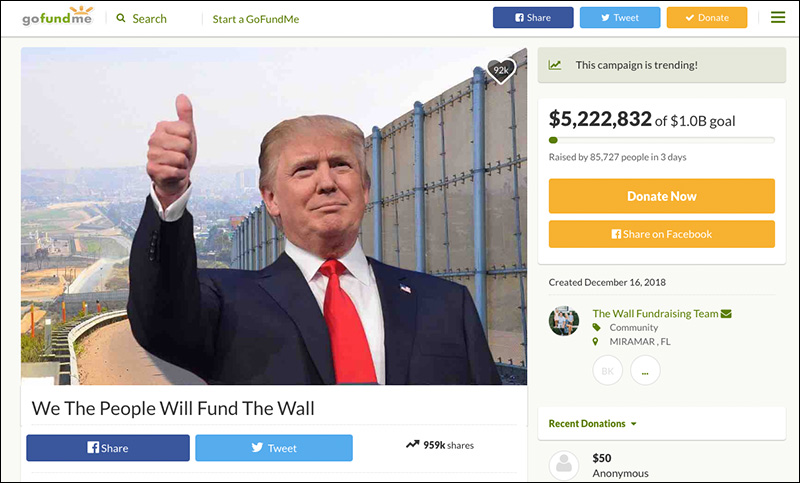 A GoFundMe campaign started by a Purple Heart recipient has accumulated over $5.5 million in donations going toward building a wall on the southern U.S. border with Mexico.

The “We The People Will Fund the Wall” campaign is making headlines across the country as more and more Americans donate to help reach $1 billion, which triple-amputee veteran Brian Kolfage says will “100%” go toward funding President Trump’s long-promised border wall.

“We have contacted the Trump Administration to secure a point of contact where all the funds will go upon completion. When we get this information secured we will update. We have many very high level contacts already helping,” Kolfage explains in his GoFundMe post.

“The government has accepted large private donations before, most recently a billionaire donated $7.5 Million to fund half of the Washington Monument repairs in 2012; this is no different,” says Kolfage, who lost his limbs during an Operation Iraqi Freedom mission in 2004.

If the goal is not reached, Kolfage says all money will be refunded: “If we don’t reach our goal or come significantly close we will refund every single penny. We are working on a time frame to achieve.”

The viral campaign has been shared over one million times.

The grassroots effort comes as President Trump vows to keep grappling with Democrats and RINOs in Congress to secure funding for the wall, with many supporters urging him to veto any year-end spending package that does not include wall funding.

When I begrudgingly signed the Omnibus Bill, I was promised the Wall and Border Security by leadership. Would be done by end of year (NOW). It didn’t happen! We foolishly fight for Border Security for other countries – but not for our beloved U.S.A. Not good!

The Democrats, who know Steel Slats (Wall) are necessary for Border Security, are putting politics over Country. What they are just beginning to realize is that I will not sign any of their legislation, including infrastructure, unless it has perfect Border Security. U.S.A. WINS!