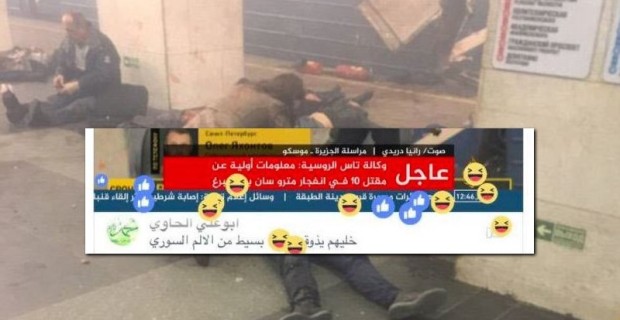 At least 12 people have been killed and over 50 injured after multiple blasts – suspected IEDs including a “nail bomb” – erupted inside a St. Petersburg subway car.

Russian police are focusing on an Islamic suspect filmed by surveillance cameras inside a St. Petersburg subway station right before the bombing which killed at least 12.

A clear image of the St. Petersburg suspect police are focusing on: https://t.co/g762WlLS6m #tcot #Russia pic.twitter.com/PyMPsHN55p

Al Jazeera Arabic’s Facebook coverage of the terror attack in St. Petersburg, Russia was flooded with positive comments as so-called “moderate Muslims” once again celebrated what is likely another Islamic terror attack.

“An improvised explosive device was found and timely destroyed at the Ploshchad Vosstania metro station,” Russia’s National Anti-Terrorist Committee said in a statement.

“We ask Allah to bless the operation by the lions of the Caliphate, we ask Allah to kill the Crusaders,” said an ISIS supporter in response to the attack.

Russian media reports a man left a briefcase on the train before moving carriages moments before the deadly blast and a second explosive device was found and defused in a nearby station.

9:54am CT – Putin Expresses ‘Words of the Most Sincere Regret, Sympathy to Relatives of Those Killed and Injured’

“I want to express words of the most sincere regret, sympathy to relatives of those killed and injured. I have already talked to the heads of special services, with the FSB director,” Russian President Putin said about the blasts. “Law enforcement agencies and special services are working, they will do everything in order to reveal the causes of what happened.”

9:44am CT – All Possible Causes of St Petersburg Blast, Including Terror, Under Consideration

All possible causes of the St Petersburg underground explosion, including terrorism, are being considered, said Russian President Putin.

“The causes are not clear, so it is premature to speak of this. The investigation will reveal [them],” he stated. “However, obviously we are always considering all options – technical and criminal, first of all, manifestations of a terrorist nature.”