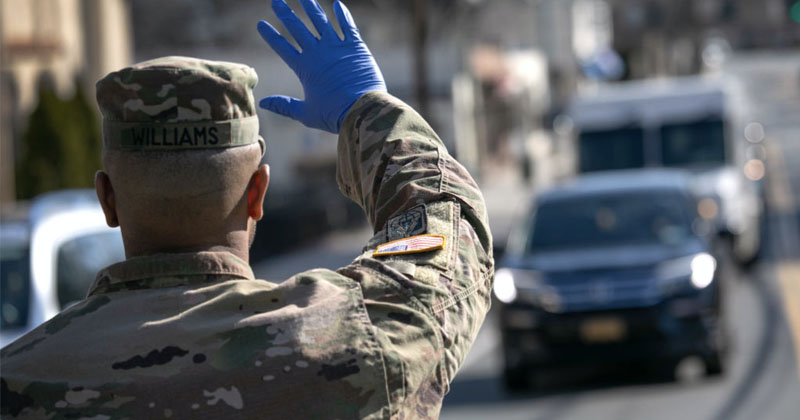 The number of confirmed coronavirus cases in the US state of New York has reached 10,356, while New York City has registered 6,211 people infected with the virus, Governor Andrew Cuomo said at a press briefing on 21 March.

US Army, National Guard troops have entered New York to take over hotels, college dormitories, and sports arenas and turn them into ICU-like medical facilities, photos and videos of netizens show.

According to The Wall Street Journal, the US Army Corps of Engineers plans to take over as many as 10,000 hotel rooms, college dormitories, and other spaces in New York for medical services as the number of coronavirus hospitalisations rises exponentially

Photos and videos of the soldiers on NYC’s streets have been shared on social media platforms.

#US– More than 3,300 National Guard soldiers are deployed across 28 states and US Army Corps of Engineers work to convert 10,000 hotel and dorm rooms to hospitals in New York as military expands role in coronavirus outbreak.
📸 pic.twitter.com/mjDD2a06ie

​To further contain the spread of the virus, NYC limited ferry service and reduced the number of boats during rush hours to three, effective on Sunday at midnight.

As of 22 March, ​76 patients have died from the disease in the state, according to Johns Hopkins University.

The United States is now third in the world in terms of the number of confirmed coronavirus cases, it is surpassed by Italy and China, the Johns Hopkins University Coronavirus Resource Centre count shows.

There are now more than 26,747 confirmed COVID-19 cases in the United States. Over 300 people have died from the disease in the US, while 176 have recovered.