For those feeling down in the dumps, the US military now has a solution: an anti-suicidal nasal spray that delivers antidepressant chemicals to the brain.
­

The US Army has awarded a scientist at the Indiana University School of Medicine $3 million to develop a nasal spray that eclipses suicidal thoughts. Dr. Michael Kubek and his research team will have three years to ascertain whether the nasal spray is a safe and effective method of preventing suicides.

The research grant comes after the Army lost 38 of its soldiers to suspected suicide in July, setting a record high. So far in 2012, the Army has confirmed 66 active duty suicides and is investigating 50 more, making a total of 116 cases.

The Army’s suicide rate is at the highest level in history, with more American soldiers taking their own lives than being killed by the Taliban. The Pentagon reported in June that suicides among soldiers averaged one per day this year, surpassing the rate of combat fatalities.

But the naturally occurring neurochemical thyrotropin-releasing hormone (TRH) could slow the rising suicide rate. The chemical has a euphoric, calming, antidepressant effect. TRH has been shown to decrease suicidal ideas, depression and bipolar disorders.

“We’ve known since the 1970s that TRH has antidepressant effects, and it works quite rapidly,” Kubek told The Daily. “The bottom-line problem has been figuring out how to get it into the brain.” 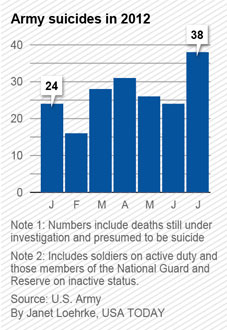 Until now, doctors have only been able to transmit TRH through injections into the spinal cord. Pills and blood injections do not allow TRH to enter the brain.

But with new technology, Kubek’s team of research scientists has found the nasal cavity can safely carry TRH across the blood-brain barrier.

“This is far from a soldiers-only solution,” Kubek said. “Potentially, if this works, we have an entirely new type of pharmacology.”

If the nasal spray is proven effective, soldiers in crisis or those taking other antidepressants would also be given TRH.

“The phase directly after starting an antidepressant is a very vulnerable time frame in a patient’s life,” Dr. Ken Duckworth, medical director for the National Alliance on Mental Illness, told The Daily. “The nasal spray would stabilize them right away, while they wait for the [antidepressants] to do their job.”

While the suicide rate is increasing in the military, it is also an increasing concern in the US civilian population.

Suicide is the fourth leading cause of death for adults between the ages of 18 and 65 years. Every day, more than 100 Americans take their own life.

This article first appeared on RT.com