An egregious war crime was reported on by the Washington Post, but deceitfully and purposefully spun and shrugged off. In the Post’s article, “Syrian rebels execute unarmed government soldiers; dozens killed in fighting,” it is first reported:

Syrian rebels executed at least a half-dozen unarmed government soldiers Thursday after attacks on checkpoints near the town of Saraqeb in northwest Syria.

The execution of the soldiers, which was documented in a graphic video [GRAPHIC] posted online Thursday, is not the first time that rebel fighters appear to have committed war crimes. U.N. representatives and human rights organizations have repeatedly criticized the Syrian opposition in recent months for carrying out summary executions and for abusing detainees.

The video clearly shows unarmed men, none of whom are wearing uniforms or equipment typical of “government soldiers.” The Washington Post then links to another video while reporting:

A second video posted online Thursday [GRAPHIC], which appears to have been filmed shortly after the execution, shows at least three other bodies spread out around the checkpoint. The man filming approaches two of the bodies and says, “The shabiha of Assad, the dogs.”

“Shabiha,” of course refers to alleged civilian militias organized locally to resist terrorists entering into and attempting to overrun neighborhoods. The term “shabiha” has been used by the Western media as a catch-all to spin any massacre committed against civilians by US-backed terrorists operating in Syria. That the murderers themselves, filming their own crime, refer to the victims as “shabiha” – indicates that civilians, not Syrian government forces, were murdered – contrary to what the Washington Post reported.

The term suspected “shabiha” has become analogous of the Western media’s use of the term “African mercenaries” in Libya during NATO destabilization and regime change operations there in 2011. These “African mercenaries” were lynched, beheaded, shot, burned, and hacked to pieces, just as terrorists are  now doing to suspected “shabiha” across Syria. 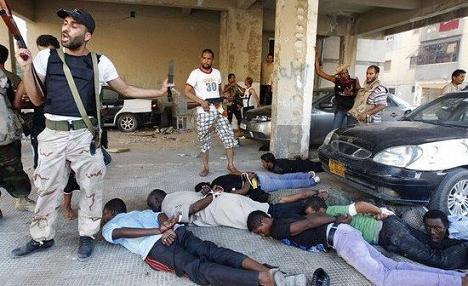 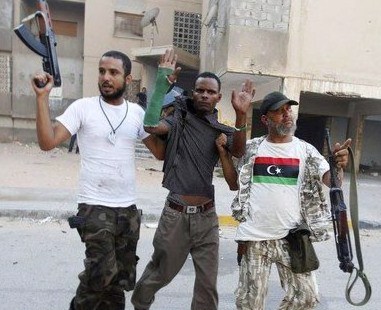 Photo: Images and reports eventually trickled out as NATO-backed genocide unfolded throughout Tripoli’s streets, indicating the destruction of infrastructure and the specific targeting of black Libyans written off by the corporate media as “suspected mercenaries.” Benghazi rebels have been long reported to harbor extremist ideologies and an intense ethnic and racial hatred. These very Libyan, Benghazi terrorists are now streaming into Syria to commit similar atrocities against the Syrian people.

It would later turn out these black Africans were not mercenaries, but citizens who had lived in Libya for generations fighting desperately for their lives against sectarian extremists intolerant of their complexion and creed. Racially motivated attacks by NATO-backed terrorists in Libya would culminate in the extermination of the entire city of Tawarga where an estimated 10,000-35,000 inhabitants were either exterminated, imprisoned, or exiled to refugee camps and then beyond Libya’s borders.

Video: Wiped out. Tawarga, once home to 10,000 (this video claims up to 35,000) people, many part of Libya’s black community who had resided in the country for generations, had its inhabitants either exiled, imprisoned or exterminated. NATO-backed militants told the Telegraph in 2011, ” every single one of them has left, and we will never allow them to come back.” And just as the Western media initially covered up these atrocities by merely labeling all black victims of NATO terrorists as “African mercenaries,” a similar propaganda campaign is underway in Syria, labeling civilian victims of NATO-backed foreign terrorists as suspected “shibiha.”

In Syria, suspected “shabiha” are in actuality Syrians unwilling or unable, because of their ethnicity or creed, to capitulate to roving bands of foreign-armed sectarian extremists. The Washington Post and others throughout the corporate-driven Western media are willfully covering up crimes against humanity through overtly deceitful reporting and semantics.

It should be remembered, that these terrorists who have video taped themselves committing a massacre of unarmed men, out of uniform, and referred to as civilian “shabiha,” not soldiers – are at the center of renewed US, NATO, Saudi and Qatari efforts to refocus Western support for the violent, armed overthrow of the Syrian government.