As in Libya, Syrian “opposition” is led by long-time servants of Western corporate-financiers. 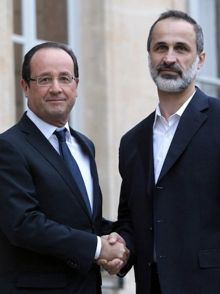 A year ago, it was reported that Libya’s new NATO-installed prime minister, Abdurrahim el-Keib, was in fact a long-time US resident, having taught at the University of Alabama and was formally employed by the Petroleum Institute, based in Abu Dhabi, UAE and sponsored by British Petroleum (BP), Shell, France’s Total, the Japan Oil Development Company, and the Abu Dhabi National Oil Company. El-Keib is listed as a “Professor and Chairman” in his Petroleum Institute profile which also describes extensive research conducted by him sponsored by various US government agencies and departments over the years.

His long history of serving and working in coordination with Western governments and corporations made him and his collaborators the ideal candidates to prepare Libya for its place within the Wall Street-London international order.

Now it is revealed that the US-handpicked opposition, announced in Doha, Qatar earlier this month, is led by a similarly compromised figure, Moaz al-Khatib. The corporate-financier-funded Carnegie Endowment for International Peace reported of al-Khatib that:

Moaz al-Khatib, an oil sector engineer and former imam of the Umayyad Mosque in Damascus, has garnered substantial praise since his designation, while Riad Seif and Suhair al-Atassi bring their own credibility to the coalition. They have now set up shop in Cairo and have received the full endorsement of France, Italy, the United Kingdom, Turkey, and the members of the Gulf Cooperation Council as the “sole representative” of the Syrian opposition. The European Union and the United States have endorsed the group in a more general fashion.

Even more importantly, from Syrian citizens of various affiliations with whom I have met recently, it is clear that al-Khatib and his associates seem to draw praise for their opposition to the regime—as an imam, al-Khatib refused to follow the speeches imposed by the regime and was imprisoned—their resistance, and their tolerance. These endorsements are a first achievement, but a number of steps are necessary before Moaz al-Khatib becomes the real head of the Syrian opposition and enters into a substantive relationship with EU leaders.

However, this resounding praise should be kept in the context that among the Carnegie Endowment’s sponsors are in fact many “oil sector” giants including British Petroleum (BP), Chevron, Exxon, and Shell.


VoltarieNet’s Thierry Meyssan reported in an article titled, “The many faces of Sheikh Ahmad Moaz Al-Khatib” that:

Completely unknown to the international public only a week ago, Sheikh Moaz al-Khatib has been catapulted to the presidency of the Syrian National Coalition, which represents pro-Western opposition in the Damascus government. Portrayed by an intense public relations campaign as a highly moral personality with no partisan or economic attachments, he is in truth a member of the Muslim Brotherhood and an executive of the Shell oil company.

Indeed, al-Khatib had worked at the al-Furat Petroleum Company for six years, according to the BBC, which is partnered with Shell Oil. Al-Khatib is also said to have lobbied for Shell in Syria between 2003-2004, and has likewise taught classes in both Europe and the United States, this according to his biography featured on his own website.


Video: The smirking crypto-sectarian extremist, and new Western proxy of the recently re-contrived “Syrian National Council,” Moaz al-Khatib admits that he’s been promised legitimacy and weapons despite openly declaring his intention of overthrowing the secular nation-state of Syria, and installing an “Islamic state.” Qatari state propaganda walks al-Khatib through the all-too-familiar talking points repeated by the US, UK, EU, Turkey and their Persian Gulf  collaborators. Qatar’s minister of state for foreign affairs sells the “legal” argument for circumventing the United Nations Security Council.

While the global public is repeatedly told that the violence in Syria is the result of “pro-democratic” forces fighting against the “brutal regime” of President Bashar al-Assad, it is Moaz al-Khatib himself who inexplicably states that two certified autocracies, those of Saudi Arabia and Qatar, are propping him up and that it is an “Islamic state” he hopes to create upon the rubble of a destroyed Syria.

Qatari state media front, Al Jazeera, credits the Qatari minister of state for foreign affairs for the very creation of al-Khatib’s new “opposition coalition. Al-Khatib, in an Al Jazeera interview, counts the two absolute monarchies of Qatar and Saudi Arabia as his “friends,” and admits – that while he cannot say who – “friends” have promised him weapons as he embarks on the creation of this “Islamic state.” Despite his assurances that his planned “Islamic state” will exhibit tolerance, festering extremist regimes such as Libya and Egypt, created with the same Western-backed formula now at work in Syria, have already proven such assurances are merely rhetoric aimed at placating public opinion long enough for Syria’s secular institutions to be irrevocably disfigured.

Already in Syria, al-Khatib’s “freedom fighters” are exposed as both foreign extremists – affiliates of Al Qaeda, as well as sectarian-driven Muslim Brotherhood militants that have plagued Syria’s sociopolitical landscape for decades. Clearly, al-Khatib has played a role in perpetuating this plague, clearly he plans to continue well into the foreseeable future – this time with Western, Turkish, Qatari and Saudi support.