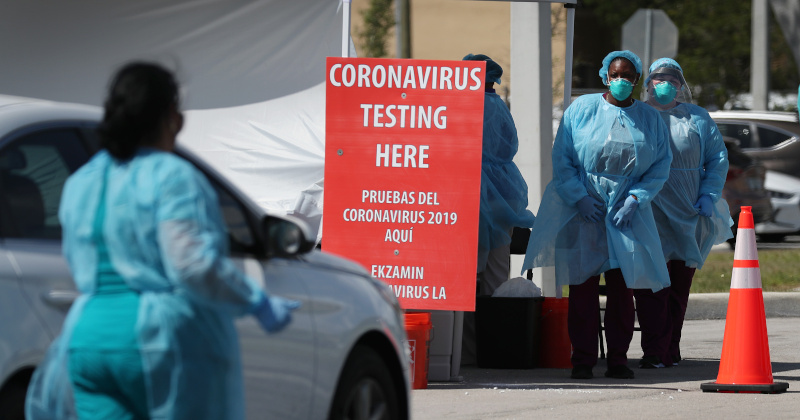 The Federal Emergency Management Agency has been activated at the highest level nationwide, and President Donald Trump is using further authority of the office to respond to the coronavirus pandemic.

“We’ll be invoking the Defense Production Act just in case we need it,” Trump said at a news conference Wednesday in the White House briefing room.

The act is the primary source of presidential authorities to expedite and expand the supply of resources from the country’s industrial base to support national defense. In this case, it will allow the production of more masks and other essential health care equipment.

The president also announced that two U.S. military hospital ships are to be deployed, with one going to New York and the other to a location yet to be determined.

In addition, the defense secretary said the military would be freeing up 5 million N95 respirators and surgical masks for use by civilian health workers and other emergency responders.

“We need millions of masks. All of that would be ordered,” said Trump.

“We are ordering thousands and thousands of ventilators,” Trump told White House reporters at the briefing with members of his administration’s coronavirus task force.

Vice President Mike Pence, who leads the task force, revealed that the government’s warehouses have more than 10,000 ventilators stockpiled.

Governors and members of the medical community have been warning there will not be enough resources to handle the onslaught of cases of seriously ill people they expect to confront in the weeks and months ahead.

Trump declared himself, “in a sense, a wartime president,” as a result of the virus sweeping all 50 states and the District of Columbia.

Earlier in the day, he and Canadian Prime Minister Justin Trudeau agreed to close their mutual border to non-essential movement.

The number of people diagnosed was projected to increase dramatically in the next four or five days.

“It spread violently. It’s a very, very contagious virus,” said the president, continuing with his stark descriptions of the disease — a reversal from earlier weeks when he and members of his administration downplayed the risk to Americans from COVID-19.

As the president spoke, major stock markets continued to decline, with the benchmark Dow Jones industrial average off 7 percent, retreating to the level it was on the day Trump took office in January 2017.

Stock trading was suspended for the fourth time in two weeks after the plunge of another key index, the S&P 500, triggered trading circuit breakers.

“There’s going to be a comeback very, very quickly,” predicted Trump. “We should be extremely calm.”

Trump is to speak to all U.S. state governors Thursday from Federal Emergency Management Agency headquarters in Washington.

Asked again about his tweets referring to COVID-19 as being caused by the “Chinese virus,” Trump said that “is not racist at all” because “it comes from China.”

Trump also criticized China for not having given “earlier notice” to the outside world about the coronavirus.

Members of the coronavirus task force Wednesday called on physicians across the nation to begin a halt to nonessential surgeries, including dentistry.

They also announced the government would allow physicians to practice across state lines, regardless of where in the country they are licensed.

The president again pledged help for employees and business of all sizes that will be hurt by the economic impact of the pandemic, but he declined to say how much money individual Americans can expect to receive from the federal government and how frequently they’ll get it.

Asked whether the U.S. unemployment could surge to 20 percent, Trump called that a worst-case scenario.

Emergency relief legislation, totaling more than $1 trillion, is expected to be approved by lawmakers this week on Capitol Hill.

Direct payments to taxpayers are expected to total $500 million.

Two members of the House of Representatives have tested positive for the coronavirus. Congressional doctors said late Wednesday the lawmakers are in good condition and self-isolating at their home, and that actions have been taken to identify anyone who may have come into contact with them.

Democrats were among the lawmakers praising Trump for invoking the Defense Production Act, which some had called for him to do.

“I am glad the president heeded my repeated calls to use his authority under the Defense Production Act to activate a war-scale manufacturing mobilization to produce the testing kits and personal protective equipment our nurses, doctors and first responders desperately need to combat this viral enemy,” said Senator Edward Markey, a member of the Commerce, Science and Transportation Committee.

More than 7,300 people in the United States have been diagnosed with COVID-19, and the disease has killed at least 115 in the country.

“We’re going to defeat the invisible enemy,” Trump assured the nation Wednesday. “And it will be a complete victory, a total victory.”