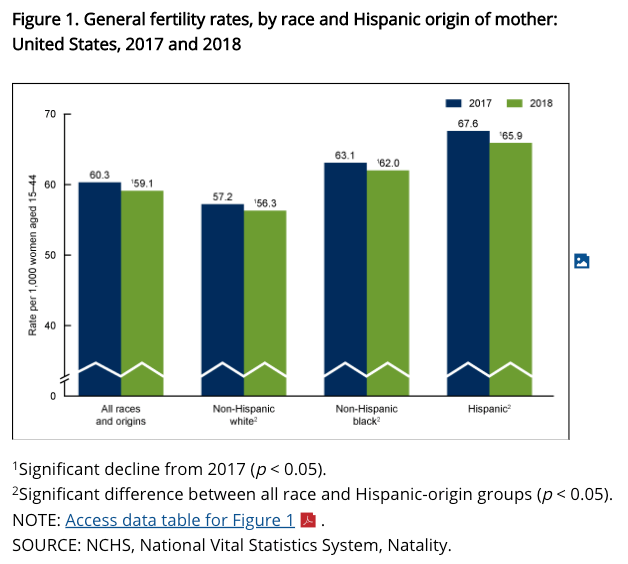 Something isn’t right in the “greatest economy ever,” as the general fertility rate continues to drop in the US, according to a new report from the Centers for Disease Control and Prevention’s (CDC) National Center for Health Statistics (NCHS).

“The 2018 general fertility rate fell to another all-time low for the United States,” the report said.

Researchers used data from the National Vital Statistics System, discovered that the general fertility rate dropped 2% between 2017 and 2018 among females aged 15 to 44.

A caller to The Alex Jones show suggested Trump declare himself a woman and become the first female President lesbian married to an immigrant, and own the libs at their own game.

NCHS stated in a separate report that the total fertility rate continues to dip underneath the level of what is needed to sustain a healthy population.

We have routinely suggested why Millennials are delaying marriage and childbirth. And in our view – this life choice is tied explicitly to economics.

Insurmountable student loans, credit card debt, and auto loans have delayed starting a family for many.

A typical child costs $14k per year, or $234k from 0 to 17, the Department of Agriculture said, money that millennials would instead use to service their debts and or use it on life experiences, like vacations.

So if the economy were so great, millennials would be able to start families, buy homes, and continue living the American dream like generations before them. But in reality, the dream died after the 2008 financial crisis, their standard of living was abruptly thrown into reverse, history will look by at millennials as the “lost generation.”